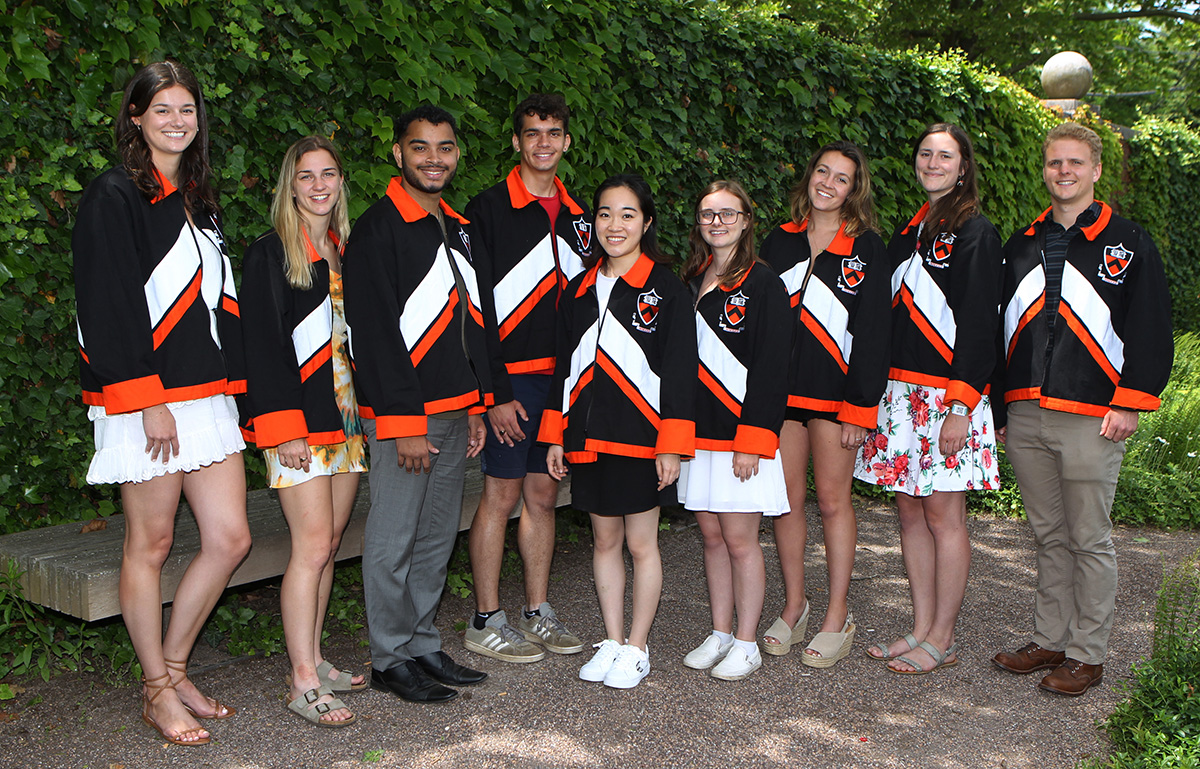 By Michele Hujber, For the Andlinger Center for Energy and the Environment

Recognizing the demanding courses, research projects, and certificate presentations they completed during the past year, Andlinger Center interim director, Claire Gmachl, highlighted the achievements of the Center’s 12 graduating seniors in the annual Class Day ceremony on Monday, May 23.

“Through their wonderful accomplishments, the Class of 2022 members of the Program in Technology & Society and the Program in Sustainable Energy have enriched themselves and the entire Princeton community,” said Gmachl, the Eugene Higgins Professor of Electrical Engineering. “The career paths of our 12 seniors are as diverse as the students themselves, and we hope that the knowledge they have gained here will inform and enrich their perspectives as they move forward in their careers.”

Eleven students earned certificates in sustainable energy, and one earned a certificate in technology and society: energy track. Professor Yiguang Ju, Robert Porter Patterson Professor of Mechanical and Aerospace Engineering and Director of the Certificate Program in Sustainable Energy, congratulated the graduates and said, “We have some amazing students graduating this year. The whole world is waiting for you to solve our energy crisis.” Research topics included impacts of extreme heat on solar and wind power production, optimization of biomass feedstock and bioenergy facility siting for a net-zero energy system, climatology of tornadoes in New Jersey and Eastern Pennsylvania, plasma-assisted catalysis for ammonia synthesis, and hydrogel fragmentation in a porous environment.

The Andlinger Center Senior Thesis Prize in Energy and the Environment was awarded to Sydney Hughes, a senior in the Program for Sustainable Energy, for her research on utilizing amino-polymer adsorbents supported on metal-organic frameworks (MOFs) for CO2 capture. Hughes combined synthesis, characterization, and adsorption analysis to understand fundamental molecular interactions and explore engineering optimizations for the MOF-polymer, composites. She also identified strategies to improve the composites’ stability and enable their long-term storage, which have important implications for industrial viability. Her work will be submitted to a journal, naming her as the first author.

Hughes, a Princeton Sachs Global Fellow who plans to work for two years as a research assistant on fuel cell catalysis at the Technical University of Munich, noted that the Andlinger Center presented her with terrific opportunities to pursue high-level, independent research with world-class professors in the field.

“I also greatly appreciated how much Professor Sarazen cared about my work and provided me advice and guidance throughout the year,” she said.

Hughes also received the Joseph Clifton Elgin Prize, which recognizes her as the senior in the School of Engineering and Applied Science who advanced the school’s interests in the community at large.

The graduates in the Program in Technology & Society and Program in Sustainable Energy will apply what they have learned to address energy and environmental issues by pursuing advanced education or working in the field. Continuing on their journeys, Ben Henry will pursue a Master of Engineering in the Department of Civil and Environmental Engineering at Princeton, followed by a Master of Atmospheric Science & Meteorology at Penn State; Nadia Ralston will work in Brazil as a Fulbright Fellow in Engineering for Sustainable Development; and Owen Engel will work for a renewable developer based in Colorado.