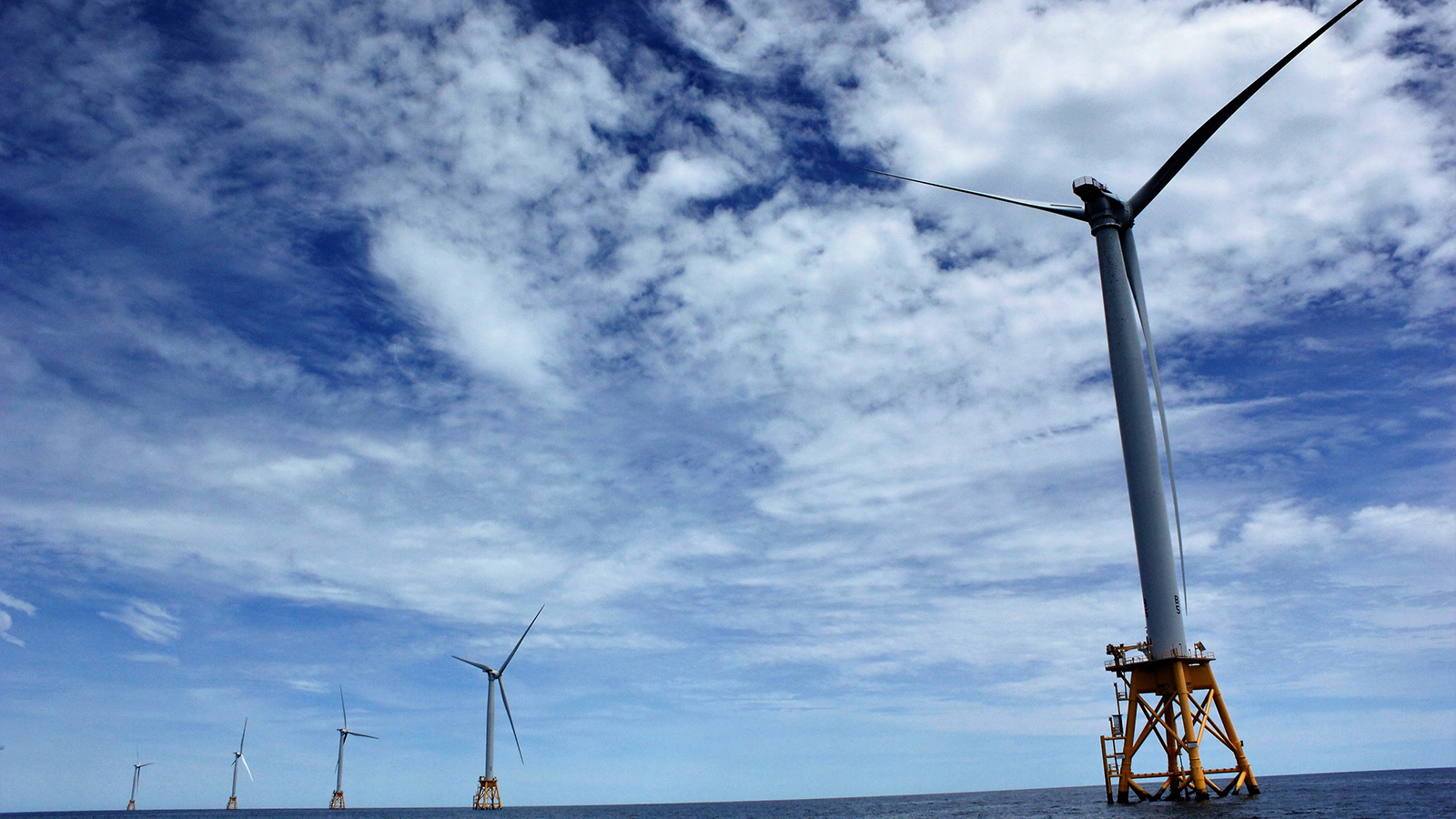 An offshore wind farm near Block Island in Rhode Island, pictured, is one of only a few currently in operation in the United States. Princeton’s Net-Zero America study calls for unprecedented growth in wind power to decarbonize the economy by mid-century. (Photo by Molly A. Seltzer)

Last week the Biden administration granted federal approval for what will be the U.S’ largest offshore wind farm to date, an 84-turbine farm off the coast of Martha’s Vineyard. Greenlighting the project aligns with Biden’s vision to rapidly expand offshore wind in the United States, specifically on the East Coast, as part of a national infrastructure plan. The plan starts to bridge the gap between the United States and the rest of the world; the U.S. has long lagged behind Europe in offshore wind, with only two small offshore wind farms and fewer than 20 turbines, compared to over 100 farms and more than 5,000 turbines across Europe. The infrastructure package is one step decarbonizing the country’s electricity supply and economy. Princeton’s Net-Zero America study, released in December 2020, pointed to the need for wind power to grow at unprecedented rates to achieve net-zero emissions by midcentury. According to the study’s four technological pathways that do not constrain wind growth to historic installment rates, total installed wind power must grow more than four-fold by 2030. The study’s authors found that by 2050, the country must have somewhere between six- and 28-fold the wind capacity that exists today, depending on the pathway.

Hultmark specializes in fluid mechanics, including flows around wind turbines and within wind farms. Bou-Zeid has expertise in environmental fluid mechanics and turbulence, wind energy forecasting, and wind farm design. The two were awarded a 2020 Andlinger Center grant for Innovative Research in Energy and the Environment to study how to better design wind farms, and particularly, offshore wind farms to maximize power output, and a 2020 award from the High Meadows Environmental Institute for its Climate and Energy Challenge for a related project.

How would you characterize the wind power industry and technology today, land-based or offshore? 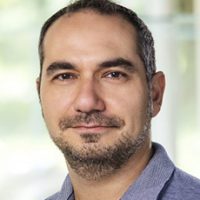 Elie Bou-Zeid (EBZ): There are certain benefits of offshore wind that are exciting and show a lot of potential for significant power production. In particular, offshore winds tend to be more steady and easier to predict. In the United States, we are finally serious about a large-scale expansion of offshore farms. The big challenge is whether we can accelerate the research, development, manufacturing and installation of wind farms at the rate that is needed to meet net-zero goals and timelines. I would be particularly concerned if manufacturing and installation outpace research and development, leading to suboptimal turbines and farms being installed. There is still much we need to learn about siting farms and predicting winds on the Eastern shoreline, for example. 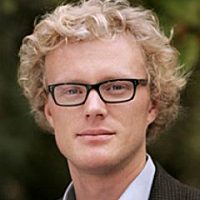 Marcus Hultmark (MH):  Wind power has been hugely successful, overperforming even the most optimistic projections of its deployment. I don’t think anyone would have predicted that curve. Yet there are interesting technical challenges that, if overcome, could help improve the performance of wind farms even further. I liken it to cars in the 1960s. One could think, “We’re done. We know how to do it.” The prevailing thought then was that automakers would make the engines bigger and bigger, so that the cars could go faster and have more horsepower. But eventually, the auto industry was forced to think about the fuel efficiency, not just the engine size. Wind turbines are “in the 60s” in many ways. There hasn’t been a need to eke out every last bit of efficiency. At this point, the industry is continuing to use a recipe that has worked for the last 20 years – making each new generation of turbines larger. No one knows when that will end, but at some point it will, and the question will shift towards making more power without necessarily making the turbines larger.

What does your research tell us about the work that still needs to get done to improve wind farms?

EBZ:  We should think about how we can optimize a whole farm or a cluster of farms, not just a single turbine. Our lab has done exploratory work on very unconventional farm designs for vertical-axis wind turbines, which  have a different blade design and rotation compared to the predominant horizontal-axis turbines. We showed that wind farm output can increase by up to 60% through smarter layouts. Other research groups have looked at approaches where the blades of the first row are tilted so that the first row produces less power, but the second and third rows produce more, which leads to more total output.

One problem is that there’s a gap between research and industry. Research wise, we tend to come up with all these complex ideas and test them in the lab with models and computational dynamics platforms. But, when we visited a land-based wind farm in Texas and asked how they designed the layout of the turbines, it became clear that they likely used a much simpler model than what we use. My current focus is mainly on wind prediction, and we are aiming to develop simple yet accurate approaches that can be more easily adopted by industry, and particularly by farm builders and operators that do not have big research and development teams.

MH: The goal of my research is to help people make better predictions on how wind turbines will perform and better understand how they actually generate power once they are installed. Wind is one of the most widely deployed renewable energy sources, yet the research community and industry does not fully understand exactly what’s going on because of the scale of wind farms and turbines. In other fields, researchers often test scaled models in a wind tunnel. That doesn’t work for wind turbines because they are so large, and the physics cannot be replicated in a conventional laboratory testing. An alternative is to do numerical simulations. Because of the scale though, we cannot do exact numerical calculations either, due to the computational cost involved; it would require too much time on even the most powerful supercomputer.

What researchers are left doing is something that requires models, which need tuning based on empirical input. This input is often imperfect, and model validation is challenging due to a lack of data. This means that designers cannot put forth out-of-the-box ideas and know how performance will be affected; performance is best predicted if the turbines and farms look similar to the past generation. But no two wind farms are identical. They are in different locations, access different winds, and use different turbines. For that reason, no one can say with certainty the best way to design wind farms for a specific area or exactly how they will perform before they are built.

This is what we aim to change. On Princeton’s Forrestal Campus we are constructing a new facility that will be able to represent the physics of a real wind farm using highly pressurized air, to essentially scale down the world 100 times. This world-unique facility will allow us to experimentally validate models and probe the physics involved in wind energy harvesting.

Can you elaborate further on the differences between offshore wind farms and land-based farms? What do they mean for getting to net-zero?

EBZ:   One important difference is that wind over oceans is faster. The water surface doesn’t add as much drag compared to the land surface, and oceans have steadier temperatures relative to the land. The cycle of heating and cooling of the land doesn’t exist in the same way offshore, which completely changes the pattern of the wind. Therefore, far-offshore floating platforms allow access to the most steady and predictable wind supplies. For farms that are closer to the shore, one feature that is important is land-sea breezes. During the day the land is hot, so the wind tends to move from sea to land; at night, the wind tends to go from land to sea. Historically, researchers have studied this circulation in very simplistic terms, and without the impact of a wind farm, so that needs further investigation.

Our findings are revealing some very complex behavior of the land-sea breezes, which will be incredibly important for forecasting and modeling offshore wind farms. That will help with siting of wind farms, and prediction of performance, day-to-day and hour-to-hour. The output of the farms may be able to be increased significantly, and in the wind industry, even a 1% output gain could lead to huge financial gains.

MH: Both on and offshore wind turbines and farms would benefit from improved predictions. The size of offshore wind turbines is growing even faster than onshore turbines. There are fewer limitations in terms of the infrastructure required to transport them, so they can be larger and they therefore produce more renewable energy for the grid. Since the installation cost of a single turbine is higher in the ocean, it makes sense to build fewer but larger turbines. The wind patterns are different on and offshore, as are the daily variations. The interactions between the air and the ocean vary from those between air and land, which can have impacts on the wakes created behind individual wind turbines, which affect the entire wind farm. We know the loss from wakes can be reduced by spacing turbines further apart but more research needs to be done on this.

Given the history of the industry and the technology, how do you see the future of wind power and offshore wind power in the country?

EBZ: With more penetration of wind power, there will be more wind farms spread over larger geographic areas, and the diversity in location would allow for the resource to be used at different times and help smooth out variations in power supply. A greater spread of farms could be operated almost as a virtual wind farm, with the sum of power production from multiple farms being utilized. Ideally, battery technology would come along and bridge the gap between when power is produced and when it is consumed. The market and feasibility can shift very rapidly in response to new technologies. It’s difficult to say what the future holds, but I think we will see rapid shifts in offshore wind in the United States and worldwide in the coming decades; in particular, I think there will be many more floating wind farms than current predictions suggest.

MH: 10 years ago, it was thought that floating offshore wind turbines were futuristic and anyone was crazy to bring them up in conversation. Now, it’s very clear that it’s not crazy. And knowing the wind industry, floating turbines will be widely deployed sooner than anyone predicts. Ideally, in the future, as we improve prediction capabilities and laboratory testing methodologies, we’d be able to shorten the cycle from design to implementation of turbines. This would also open the door for more experimental designs that are prohibited today because we do not have the tools to predict their performance and longevity.