Cultivating resilience through bits and bytes

Catherine Zandonella, Office of the Dean for Research

“When people say that, I correct them,” Lin said. “I don’t predict speciﬁc events, I predict probabilities. The probability of New York City being hit by strong storms and ﬂooding was higher than most people expected.”

But the timing was uncanny. Just months earlier, while a postdoctoral fellow at the Massachusetts Institute of Technology (MIT), Lin co-authored a study projecting that climate change would drive signiﬁcant coastal ﬂooding on a frequency of once a decade rather than once a century. New York City, the authors said, was highly vulnerable.

It was a startling prediction at the time. New York City experiences far fewer hurricanes than southeastern states like Florida. With little historical data to go on, predicting future extreme storms seemed far-fetched. But Lin’s postdoctoral mentor was MIT’s Kerry Emanuel, a veteran in the study of hurricanes in the age of climate change, and from him Lin had learned how to solve the problem of too few historical storms — she would generate her own.

Lin, who today is an associate professor of civil and environmental engineering at Princeton and associated faculty at the Andlinger Center for Energy and the Environment, compensates for the lack of historical storms by conjuring hurricanes on her computer. Consisting of bits and bytes, these storms leave behind no damage, but are quite handy at helping predict the destruction these tempests are likely to wreak, especially under future scenarios.

The practice of generating synthetic storms got its start with simple statistical models that civil engineers have used since the 1980s to design skyscrapers to resist extreme winds. But hurricanes are a lot more complicated, and they may change signiﬁcantly in a warming climate. They create not only high winds but also rainfall and storm surges. And much about how hurricanes behave is still unknown.

“The formation of hurricanes is actually quite a complex physical process that is not well understood,” Lin said. 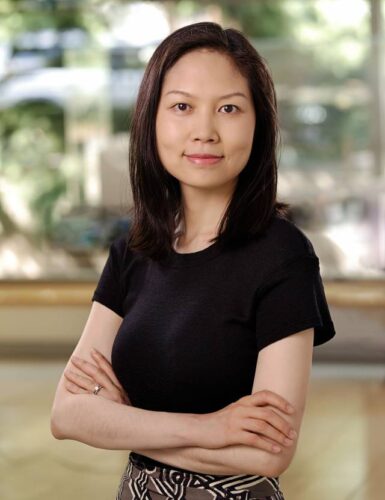 However, we do know the ingredients. They include warm surface temperatures, high humidity levels, low wind shear and high vorticity, which is the tendency for the air to move in a rotational pattern. When these factors combine in just the right way at the right time, hurricanes result.

Knowing the relationships between the makings of a hurricane and the resulting storms allows researchers to write software to simulate new storms and predict their path and strength. The engineers don’t calculate every step — that would take supercomputer-level capabilities. Instead, researchers study the likelihood that combinations of ingredients — such as wind direction and strength, humidity and high ocean temperature — give rise to storms. It is a bit like knowing that eggs, ﬂour and sugar, combined in certain ratios in a speciﬁc sequence, can make a cake, but not knowing every step in the process. By studying enough combinations of inputs and outcomes, researchers can predict which mixtures are likely to stir up a storm.

The resulting synthetic storms are all perfectly plausible. Each could spring up off the coast of Africa and traverse the Atlantic making aim for the Caribbean islands. Some might swing northward and scuttle up the East Coast, swerving inland over Manhattan. Some might move slowly, dumping copious rain, while others whip along wreaking destruction with high winds.

Since 2012, when she joined the faculty at Princeton leading her own research team, Lin has continued to improve the methods for generating realistic synthetic storms. Earlier this year, with graduate student Renzhi Jing, Lin published a new and more accurate hurricane model that incorporates a type of artiﬁcial intelligence known as machine learning. Rather than human engineers scrutinizing past ingredients to make projections of future storms, computers do the work.

The model running on Lin’s laptop can whip up thousands of storms over the course of a few hours. For each storm, the model outputs movement and direction, intensiﬁcation over time, and likelihood of making landfall.

To ﬁnd out what kind of the damage the storm could do, the team connects the storm models to hazard models that predict the amount and location of rainfall, the strength and direction of wind, and the height and spread of storm surge.

With these predictions in hand, engineers can design infrastructure resilient to the extreme winds, rainfall and coastal ﬂooding wrought by hurricanes. For example, engineers can build seawalls, elevate houses, rezone residential areas and reinforce buildings.

Where extreme storms are rare, as in New York City, synthetic storms are especially valuable for illustrating these risks. In a typical year, the Atlantic Coast experiences roughly six hurricanes, about two of which are Category 3 or higher, meaning they are especially large or severe. That isn’t much of a record on which to make a decision about building a seawall or relocating residents at a particular coastal location. But Lin’s laptop can generate 500 years of hurricanes — or about 3,000 storms — in a few hours. Roughly a third, or 1,000, will be severe, and that is a sample large enough for evaluating the potential damage.

Lin’s career at Princeton began as a graduate student in civil and environmental engineering, under the supervision of Erik Vanmarcke, who is now an emeritus professor of civil and environmental engineering. While earning her Ph.D., she completed courses in environmental policy in Princeton’s School of Public and International Affairs, where she met Michael Oppenheimer, the Albert G. Milbank Professor of Geosciences and International Affairs and the High Meadows Environmental Institute. Vanmarcke and Oppenheimer later became co-authors on the 2012 paper that came out prior to Hurricane Sandy. When Lin ﬁnished her fellowship at MIT, she wanted to ﬁnd a place where she could couple civil engineering with science and public policy, so she chose Princeton.

In a recent study, Lin and her team employed their synthetic hurricane models to estimate the risk of storm surge along the East and Gulf coasts. The team, whose work is supported by the National Science Foundation and the National Oceanic and Atmospheric Administration, found that historical 100-year ﬂoods could become annual occurrences in some northern coastal towns.

Whether Lin will be right about this prediction, time will tell.

This article was originally published in the University’s annual research magazine Discovery: Research at Princeton.