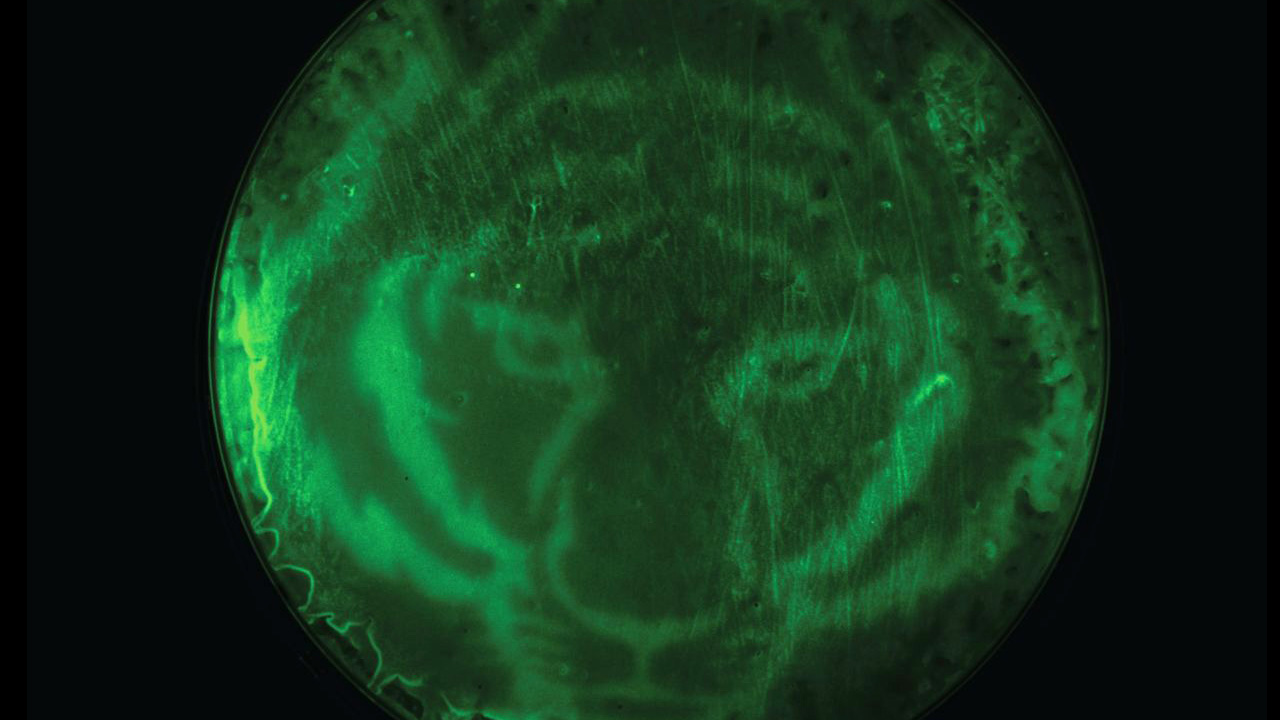 Princeton University researchers invented a method for using light to turn on and off a mechanism in E. coli bacteria that is key to producing valuable chemicals. Here the genetic tool they invented, called OptoLAC, was demonstrated by projecting light in the pattern of a tiger onto a petri dish, which caused only the bacteria exposed to the light to produce a green fluorescent protein. (Image courtesy of Lalwani et al.)

Researchers at Princeton University have created a new and improved way to more precisely control genetically engineered bacteria: by simply switching the lights on and off. Working in E. coli, the workhorse organism for scientists to engineer metabolism, researchers developed a system for controlling one of the key genetic circuits needed to turn bacteria into chemical factories that produce valuable compounds such as the biofuel isobutanol.

“All you need is illumination,” said José Avalos, an assistant professor of chemical and biological engineering at Princeton University and at the Andlinger Center for Energy and the Environment, and senior author of the findings, published Sept. 7 in Nature Chemical Biology. “There are lots of potential benefits, one of them being the ability to easily tune and reverse the induction signal.”

The new work builds on Avalos and his colleagues’ previous research, described in Nature in 2018, in which they engineered yeast to produce chemicals in the presence or absence of light. E. coli, however, is even more widely used by scientists and engineers than yeast.

Avalos and his colleagues are not the first to create E. coli whose gene expression is controlled by light. But they are the first to use light to control production of chemicals. They also are the first to use light to control the lac operon, a group of genes that is most commonly utilized for chemical induction in E. coli. “The lac operon is the gold standard circuit that people have used for decades,” Avalos said. “It’s not an understatement to say that harnessing the lac operon is one of those key achievements that enabled the explosion in biotechnology.”

When scientists engineer E. coli to produce a protein or chemical through the lac operon, they typically make that function inducible rather than something that occurs all the time. This way, the bacteria culture can grow normally until scientists are ready to put it to use. Usually, researchers rely on adding a chemical to trigger the expression of the genetically engineered trait in question. But this method has some serious limitations. “If you add a chemical, that’s it, you’ve committed,” Avalos said. “It’s done and you cannot easily remove the chemical, so you just have to wait and see if you added the right dose.”

Instead of relying on a chemical inducer, Avalos and his colleagues’ newly engineered bacteria uses the absence of light to induce reactions that lead to chemical or protein production. This allows researchers to slow or stop the reaction by simply turning on the light. Light also allows them to control where the reaction occurs. In one demonstration, Avalos and his colleagues darkened only certain sections of their bacterial Petri dish with a stencil of a tiger, creating a fluorescent tiger print through the selectively activated bacteria’s reaction. “Again, that’s something you couldn’t easily do with a chemical, because you wouldn’t be able to control the diffusion of the chemical as easily,” Avalos said. Light, unlike chemicals, is also relatively inexpensive, he adds, so using it will reduce costs and probably the carbon footprint of processes.

The full article can be found in School of Engineering and Applied Sciences website.