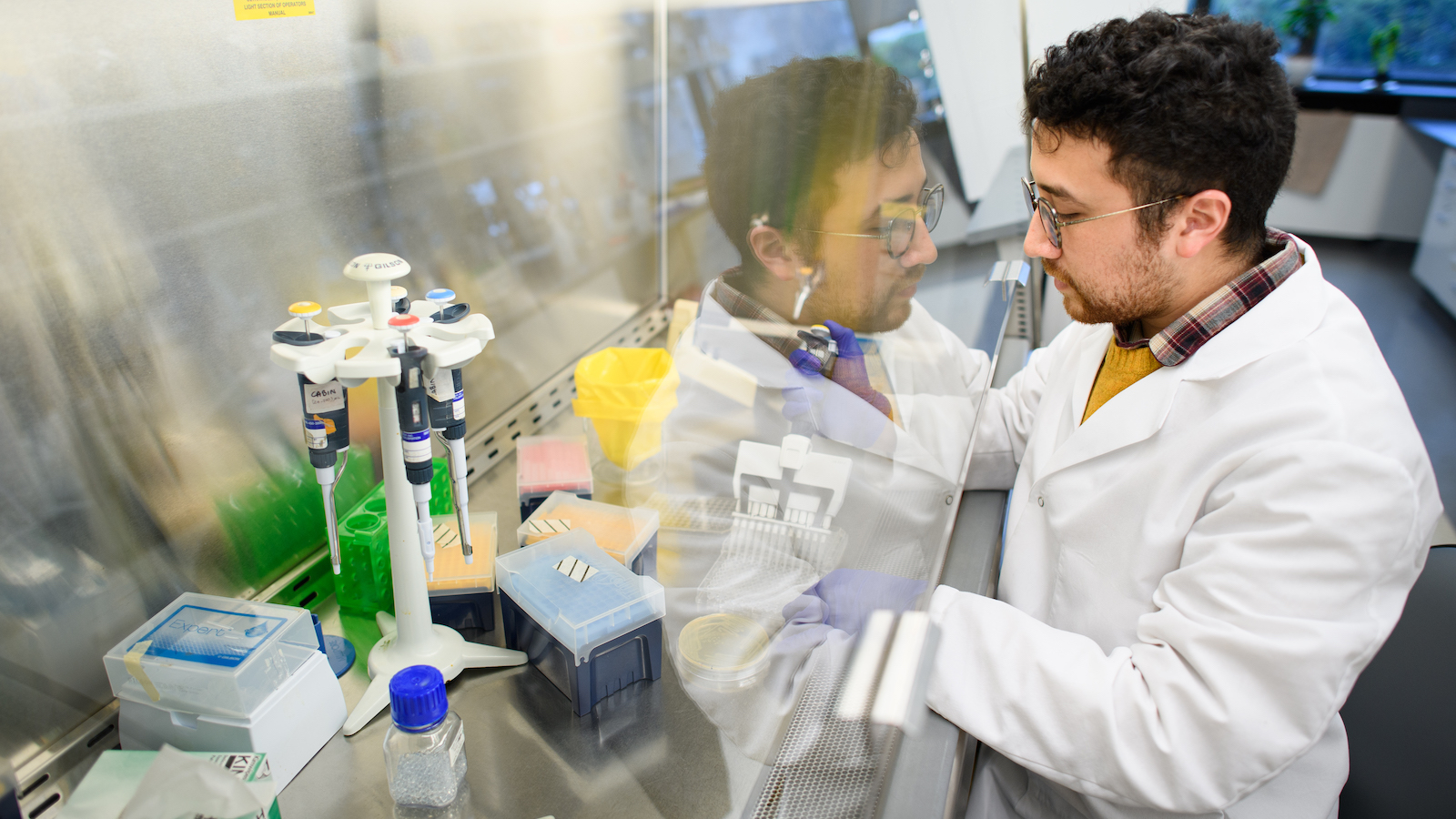 By Tom Garlinghouse, for the Office of Engineering Communications

Deploying a technique that promises to supercharge the development of biofuels, researchers at Princeton University have found a way to make yeast cultures glow when producing next generation fuels that could power cars and airplanes.

The glowing cultures address a major challenge that has slowed biofuel production: developing yeast strains that produce valuable chemicals and separating them from less productive strains of yeast. Before the development of this new technique, evaluating the performance of yeast was a slow, laborious process. Researchers had to grow separate yeast strains and independently evaluate each strain’s ability to produce fuel and other chemicals. This process could take days for each strain.

“The way we’d have to find better strains would be to take a few colonies, grow them overnight in cultures, and then start a fermentation process that would take between 24 and 48 hours,” said José Avalos the lead researcher and assistant professor of chemical and biological engineering. “Now, we’re measuring hundreds of thousands of strains per minute. This is a several-orders-of-magnitude faster way to identify better strains.”

In a paper published Jan. 12 in Nature Communications, Avalos’s team described how they developed the biosensor for production of the biofuels isobutanol and isopentanol in yeast. Both are alcohols with a higher energy content than ethanol, which is the dominant biofuel now used in the United States. Like ethanol, isobutanol and isopentanol are produced by Brewer’s yeast (Saccharomyces cerevisiae), a single-celled fungus commonly used in making bread, beer, and other alcoholic beverages. However, these advanced biofuels have much higher compatibility with existing gasoline infrastructure, allowing them to replace more fossil fuel, and can easily be upgraded to jet fuel.

“Scientists, engineers, and regulators are still examining them, but these alcohols could be completely compatible with our current gasoline infrastructure,” said Avalos, the paper’s senior author. “Most cars couldn’t use gasoline with ethanol concentrations higher than 10 or 15 percent. However, they could use gasoline with much higher concentrations of isobutanol. So that means you could replace more gasoline with these advanced fuels.”

The current research began with the challenge of speeding up the development of yeast strains for isobutanol and isopentanol production. The rate at which scientists can introduce genetic diversity in yeast greatly outpaces the rate at which they can screen each strain to find those with increased biofuel production. Researchers thus had to figure out which genes to turn on or off and what enzymes or proteins were beneficial to the process using very slow, laborious, and expensive methods.

“There are millions of ways to try this until you finally find the best way that works,” said Jeremy Cortez, a graduate student in molecular biology and one of the paper’s authors. “It would be great if we could just tap into the cell — listen to the metabolic ‘talks’ the various components within the cell are having among themselves — and have the biosensor tell us it’s making a lot of the product, rather than having us go through these long procedures.”

The researchers accomplished this by genetically engineering the cells to produce a fluorescent protein when they were making chemicals for biofuels. Scientists could then use the fluorescence as a sensor to look for production.

“We essentially harnessed this transcription factor so that when the cell is producing more biofuel, it also turns on production of a fluorescent protein,” said Avalos. “It’s doing what it normally does, but now we can see the cell respond to enhanced metabolic activity. We are no longer blind.”

Ultimately, use of the biosensor provided the researchers the breakthrough they were looking for, one that could hasten the production of advanced biofuels and possibly help phase out the use of carbon-emitting fossil fuels.

Avalos said that biofuels can serve as a critical step as the world moves to lower-carbon energy. He noted that it will be extremely difficult to electrify cars fast enough to meet the Paris Agreement goal of limiting global warming to 1.5 degrees Celsius above pre-industrial levels. Also, aircraft and some other transportation modes are hard to electrify. Isobutanol can also be used to make jet fuel with a lower carbon footprint.

This theme of urgency is echoed by Cortez. “Climate change is happening,” he said. “If biosensors can save us time, which they do, then that’s the best outcome.”

Additional authors on the article “Biosensor for branched-chain amino acid metabolism in yeast and applications in isobutanol and isopentanol production” include Yanfei Zhang and Sarah K. Hammer, former graduate students in chemical and biological engineering, César Carrasco-López and Sergio Á, García Echauri, postdoctoral researchers in the Avalos lab, and Jessica Wiggins and Wei Wang, researchers in the Lewis-Sigler Institute for Integrative Genomics.