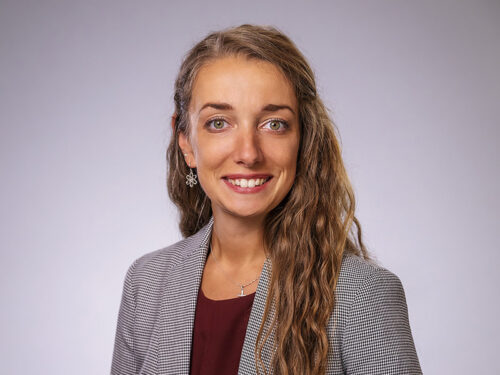 Chemical reactions drive the world’s most basic technologies, producing the food we eat, the clothes we wear, the buildings we occupy and the fuels that heat and move us. To make those reactions faster, more efficient, and less destructive, scientists and engineers turn to catalysts, a $31 billion industry that enables a vast amount of the material realities our society takes for granted.

Michele Sarazen, assistant professor of chemical and biological engineering and an associated faculty member in the Andlinger Center for Energy and the Environment, believes catalytic processes developed by a century of oil-and-gas research can power the environmentally sustainable economy we need for the next 100 years. She recently published a perspective in The Catalyst Review, where she laid out a framework for how to approach this complex problem from the molecular to the global scale. “While the task is daunting, our industry is well equipped,” she wrote.

Below is a discussion with Sarazen on the role of catalysis in our everyday lives and in the transition to more sustainable industries.

In a recent opinion piece, you wrote about new approaches to environmental sustainability, and you focused your attention on the science of catalysis. Just to lay out the basics, how have catalysts been used in the past and what role do you see them playing in the future?

Believe it or not, catalysts are involved in the processes to make many of the products we use in our daily lives. There are natural catalysts, or enzymes, that are involved in the conversion of milk into cheese, making paper from pulp, as well as beer and wine fermentation to name a few. There are also synthetic industrial catalysts, which are what my lab researches, that have historically been used to convert crude petroleum into fuels and chemicals. This includes the gasoline, diesel, and jet fuel we use in transportation, but also consumer goods like pharmaceuticals, fragrances, plastics, soaps, toothpastes. Our society has become reliant on many of these chemicals and manufactured goods such that catalysts will continue to be utilized in their production. Moving forward, though, it will be imperative to improve catalysts and catalytic processes to be more efficient (i.e., use less energy and/or materials) and to utilize more sustainable resources (i.e., renewable or closed-carbon resources).

So catalysts are in everything! But we almost never hear about them in the news or in everyday conversations. If catalysts were improved in the ways you’re talking about, what kinds of broad impacts would we see?

In theory, both types of improvements would lead to lower carbon emissions for the production of these fuels, chemicals, and goods. These are not visible impacts but are quite tangible ones given the effect of carbon emissions on our daily lives through climate change. For something that is inherently carbon-based, like transportation fuels, the carbon emissions are not just at the catalytic convertor of your car (the reactor in your tailpipe with precious metal catalysts that converts innately toxic CO into CO2), the emissions also come at the processing steps that convert crude oil into that transportation fuel using catalysts. These latter emissions can be lowered through more efficient catalytic conversions but also through the optimization of non-petroleum feedstocks like biomass or waste plastics.

It sounds like you’re saying better catalysis would reduce the impact all these ordinary products have on the climate, from toothpaste to tailpipe. What will it take to achieve that?

It depends a little on where in that line of toothpaste to tailpipe it sits. For catalyst modifications that affect more mature technologies, the research is done in academic labs like ours but also industrial research facilities. These types of developed catalysts are more drop-in technologies that just need buy-in from industry without significant modifications to infrastructure. However, due to the scale, even modest energy efficiency gains in catalytic processes, and related downstream separations, can have massive ramifications on total energy usage and thus emissions. For newer technologies, such as the catalytic upgrading of CO2, which can be captured from point sources or air using related materials, some governmental incentive is needed not only to promote research but also to facilitate implementation by offsetting costs. Fortunately, the Department of Energy recently announced several Earthshots that are targeting this exact type of research.

What kinds of improvements are you and your group working on?

One line of research in our group is making catalytic active sites buried within porous materials more accessible to our desired reactants. If more of the sites are accessible, then the catalyst is better utilized. We do this by using synthetic techniques to create “molecular highways” that allow for improved diffusion of molecules. The interplay between that diffusion and the outcome of the reaction was the topic of my ACS Summer School Lecture. Another line of research we are exploring is trying to understand how catalysts deactivate (or become unusable) so that we can design better catalysts. Some deactivation pathways are reversible, meaning they return to their native state after high temperature treatments. These treatments often cost a lot of energy. Other deactivation pathways are irreversible, meaning the catalyst cannot be used again. If we minimize the deactivation from either pathway, we can ultimately utilize the same catalysts for longer, which decreases energy and material usage.

When it comes to energy and the environment, so much attention gets paid to looming catastrophes and big social mobilization efforts. I imagine some people hear about the kind of industrial thrift you’re describing and feel like it’s almost quaint by comparison. So why focus on process improvements instead of initiating radical change?

In short, we try to (and need to) focus on both routes. The process improvements will be needed for two reasons: 1) the switch to new infrastructure will not happen overnight and 2) some energy-dense transportation fuels, like aviation and to a lesser extent diesel, will need to remain carbon-based. The transition from typically sourcing these fuels from petroleum to renewable and/or waste feedstocks (biomass, waste plastics) will involve some of these same fundamental catalyst optimizations, and they can be made even more sustainable by utilizing renewable sources as the energy input, i.e., solar- and wind-derived electricity to power electrocatalysis or plasma catalysis.

You wrote, “While the task is daunting, our industry is well equipped” for the transition. What’s the biggest challenge here, and what makes you optimistic it can be overcome?

The challenge is due to the scale, in part because of societies’ growing dependency on products from these routes, from fuels to feedstocks for making clothes, plastics, etc. Some of this growing dependency is from need — fertilizer to make more food for growing populations, broader global access to electricity and technology — and some is from convenience — single-use plastics, fast fashion, electronics. Part of my optimism comes from the students I work with in my lab and teach in my classroom (including those who take my elective “Green and Catalytic Chemistry”). Their energy and drive to make societal change through engineering and applied chemistry is infectious.

This story originally appeared on the Princeton Chemical and Biological Engineering website.