The Princeton Club of New York City buzzed June 18th as research leaders from ExxonMobil, PSEG, American Tower Corporation, and Siemens came together with Princeton University scientists to discuss the challenges and opportunities for climate progress through clean technology development and deployment.

The group gathered for the annual retreat of the Princeton E-ffiliates Partnership, a corporate membership-based initiative administered by the Andlinger Center for Energy and the Environment focused on facilitating collaboration between industry and Princeton University’s research community. Over the two-day event, Princeton faculty members, researchers, and graduate and undergraduate students talked intensively with industry leaders about new technologies, opportunities to scale up such technology, and what effective partnerships between industry and academia look like in practice. 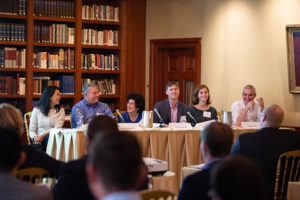 “The retreat embodies the Andlinger Center’s mission of translating fundamental knowledge into practical solutions,” said Yueh-Lin (Lynn) Loo, director of the Andlinger Center. “We convene all relevant stakeholders for work that is inherently interdisciplinary. We undertake research to build products and solutions that work in the field,” said Loo, the Theodora D. ‘78 and William H. Walton III ’74 professor in engineering and professor of chemical and biological engineering.

As such, solutions were at the forefront of the discussions. To kick off the day, Stefano Consonni, visiting research scholar with the energy systems analysis group at the Andlinger Center and professor of systems for energy and the environment at Politecnico di Milano, presented on carbon dioxide capture during cement, steel and petrochemical production. These are all energy- and carbon-intensive processes that can be made more efficient by re-using their carbon byproducts. Minje Chen, assistant professor of electrical engineering and the Andlinger Center for Energy and the Environment, discussed opportunities for efficiency improvements in the power sector at “the grid’s edge,” or where power is generated and consumed. He spoke of increasingly efficient and intelligent power electronics that could change how consumers and the products themselves use electricity, thereby decreasing carbon emissions from the power sector.

The talks were all driven by the underlying questions: how can the Andlinger Center and its corporate partners work together to increase their impact and ensure the world’s energy and environmental future? Which topics are most important?

To probe these questions a panel of Andlinger Center faculty, postdoctoral researchers and visiting fellows discussed their visions for a decarbonized future and identified industries and technologies that represent a source of inspiration or concern to them. Each panelist projected a 5, 10, and 20-year outlook, described their fantasy climate solution in a world barring economic, political and social constraints, and then offered a question that needs more thought. Some panelists called for more research on autonomous vehicles and the ride sharing economy, while others were concerned about the carbon emissions of the industrial sector.

One topic that resonated with the audience and arose throughout the day was the importance of resiliency and self-sustaining energy systems. Darren Crosse, the chief technical officer for Europe, Middle East and Africa at American Tower Corporation, an international owner and operator of wireless and broadcast communications infrastructure, flew in from Johannesburg  for an on-stage conversation with Dan Steingart, associate professor of mechanical and aerospace engineering and the Andlinger Center. Crosse reiterated that his industry relies on keeping communications infrastructure powered. He identified the pain points for his company as it works to power isolated and vulnerable sites.  Steingart and Crosse discussed cultural challenges, supply chain issues, and physical impediments to developing communications infrastructure in both rural and urban areas.  As the company builds and deploys communications towers with microgrids, Crosse emphasized the importance of getting new technologies into the field as quickly as possible. In that sense, corporate case studies can serve as living laboratories for the academic community to draw on and adjust research directions based on how competing technologies, such as lithium-ion and lead-acid batteries, survive and perform in the field.

“A thread that connected each of the conversations was an understanding that everyone was there to collaborate,” said Mark Zondlo, associate director for external partnerships at the Andlinger Center. “There was open communication about the challenges that companies and labs face in developing and deploying clean technology, meeting sustainability goals, and using big data to improve performance.”

The exchange of ideas between those who have experience in the field and those with experience in the laboratory was perhaps most palpable during the evening research poster presentations. The research presenters consulted one-on-one with attendees about practical questions that plague academics and practitioners alike, such as factors that affect battery lifecycle and recycling; design elements of self-powered water filters; and strategies to cool humans without over-conditioning spaces, to name a few.

The importance of building solutions that make landscapes and systems resilient to disruptions was reiterated on day two of the meeting when the group took to the East River Ferry and the streets of Lower Manhattan for a tour of Superstorm Sandy’s impacts on the city. The tour was led by Catherine McVay Hughes, who earned a BSE in civil and environmental engineering from Princeton and is a founding member of CB1’s “Manhattan Tip” Resiliency Task Force. The group saw the high-water mark left on the exposed brick of Pasanella & Son Vintners, a downtown wine shop that was flooded during the storm. The group stopped at Battery Park and Pier A Harbor House in nearby Battery Park City, which was being renovated when Sandy hit. The tour stopped to see a newly reinforced steel door of a nearby parking garage that was installed to prevent flooding, which led to cars floating into the streets after the superstorm hit in fall 2012.

The tour reminded attendees of the relevance of the prior day’s talks, and why developing practical solutions today is so critical, as environmental conditions are changing and becoming more extreme.

“It was important to show participants nearly six years after Superstorm Sandy struck New York all of the places that were impacted, the rebuilding efforts, and the work that is still under way to fortify Lower Manhattan against sea-level rise, storm surges and stronger storms” said McVay Hughes.

It’s clear from the talks and the tour that solutions are in progress, and that all hands are on deck.