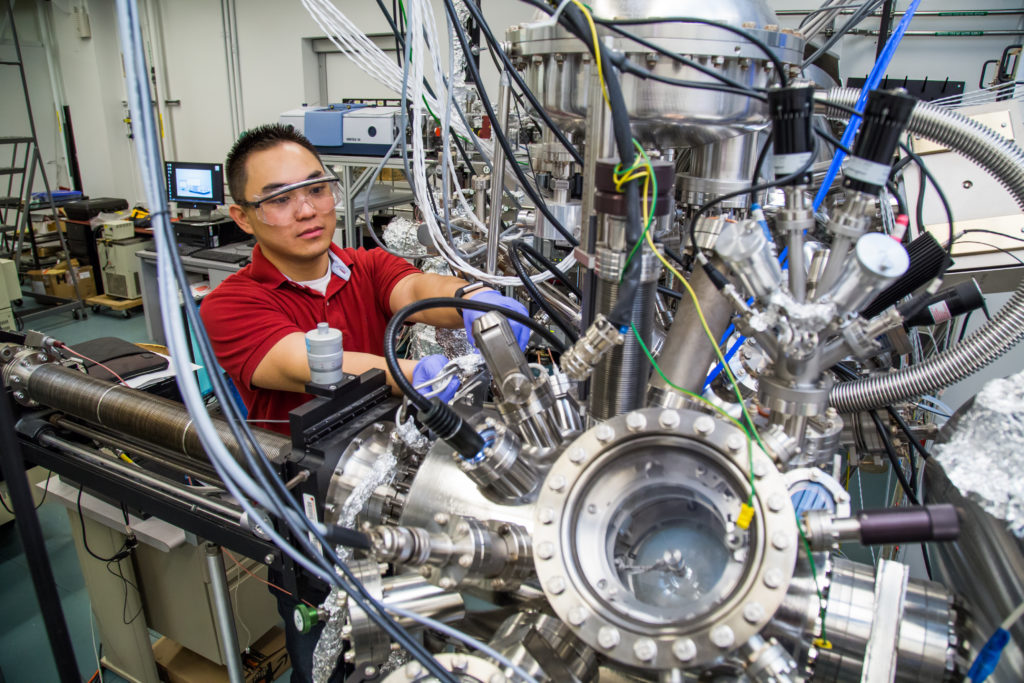 Clark Chen spent the past year studying how to create sustainable fuels and simultaneously reduce carbon dioxide in the atmosphere using solar energy. Ryan Edwards developed advanced computer models to study the environmental impacts of hydraulic fracturing. Their respective research projects were made possible by the Maeder Graduate Fellowships in Energy and the Environment at the Andlinger Center for Energy and the Environment at Princeton University.

Each year, Princeton faculty members nominate candidates for this honor by drawing upon top graduate students performing research related to energy and the environment. Selection for the fellowship, which is supported by the Paul A. Maeder ’75 Fund for Innovation in Energy and the Environment, is based on the promising potential of the researcher and his or her accomplishments.

For this edition of “People Spotlight” at the Andlinger Center, we feature our two 2016 – 2017 Maeder graduate fellows.

Chen is a chemical and biological engineering graduate student mentored by Bruce Koel, professor of chemical and biological engineering. Among his achievements, Chen filed a patent application in the area of energy storage and has also written two papers on catalysts that can improve hydrogen production using solar power. One appeared in the journal Physical Chemistry Chemical Physics and the second one in Journal of Materials Chemistry A. Last year, he presented several papers on the chemical reaction of water splitting into hydrogen and oxygen molecules at four conferences and won the student poster award at the spring symposium for the Catalysis Society of Metro New York.

During his Maeder fellowship, Chen explored two methods that use solar energy to make hydrogen and methanol. Hydrogen and methanol can provide energy for transportation. Both are also an essential feedstock in the chemical industry for products, such as plastics and paints. However, the two are derived from fossil fuels and their production methods are energy intensive.

“It’s my goal to understand the fundamental mechanisms of the two processes – solar hydrogen production and carbon dioxide reduction –  and apply this knowledge to improve our ability for making hydrogen and methanol,” said Chen.

In solar hydrogen production, a solar-powered water-splitting device is used to separate water into hydrogen and oxygen molecules. Catalysts, which Chen has developed, speed up the production of hydrogen and oxygen. The captured hydrogen can be used for the creation of fertilizer, fed into a fuel cell to generate electricity, or combined with carbon monoxide to make methanol. This particular hydrogen production method is more environmentally friendly than existing processes.

“If we can develop a highly efficient process for carbon dioxide-to-methanol conversion, we can kill two birds with one stone,” he said.

For his research, Chen went to the Brookhaven National Laboratory in Upton, New York, to use the synchrotron facility, a type of particle accelerator. It enabled him to study in greater detail solar hydrogen production and the carbon dioxide reduction process.

From his year-long fellowship, Chen developed catalysts for solar hydrogen production, set up several new lab techniques to facilitate his research, and most importantly, made progress on understanding both chemical production methods. His findings have generated a few proposed papers for journals, he said, and may lead to commercial use in the future.

“If we can make these technologies viable, it’ll really help reduce the carbon footprint and improve overall efficiency in creating sources for renewable energy,” Chen said. 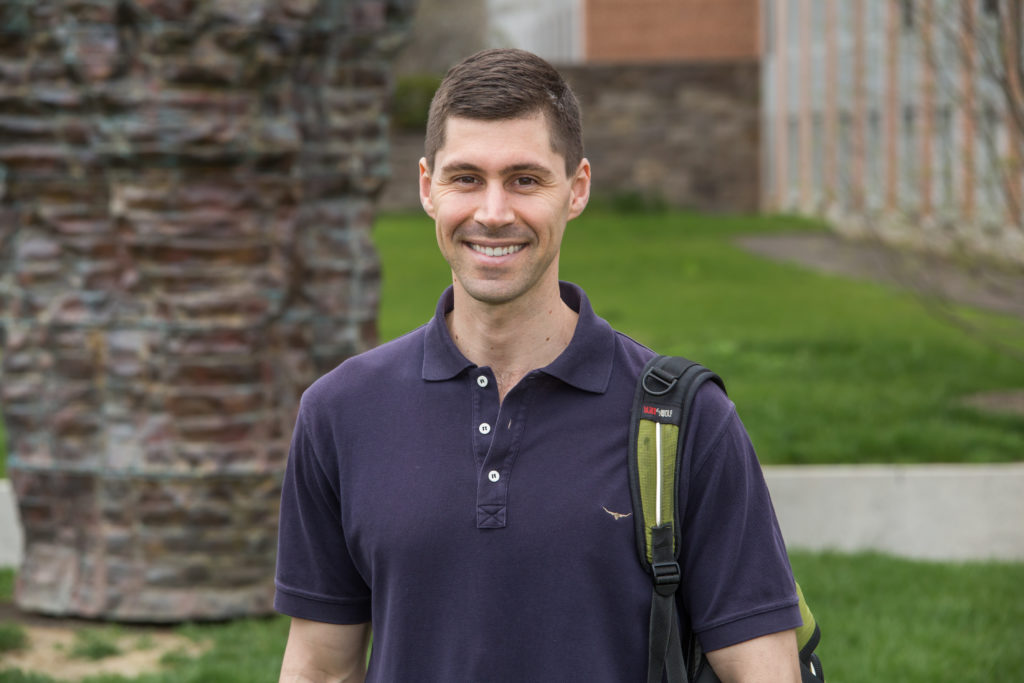 Ryan Edwards, a civil and environmental engineering graduate student, in front of the Andlinger Center. (Photo by David Kelly Crow)

Edwards is a civil and environmental engineering graduate student. He works with Michael Celia, the director of the Princeton Environmental Institute, the Theodora Shelton Pitney Professor of Environmental Studies, and professor of civil and environmental engineering. Among his achievements, Edwards served as a policy consultant for the National Governors Association and authored a paper on carbon capture and sequestration in shale gas wells that appeared in Environmental Science and Technology. As a member of Princeton Energy and Climate Scholars (PECS), a selected multidisciplinary group of doctoral students, Edwards led a team advising Princeton on the University’s energy and emissions reduction plans during the past year. A paper detailing their efforts is in the works.

For the Maeder fellowship, Edwards spent the year studying the potential environmental impacts from hydraulic fracturing in shale gas formations. The results from the project will help inform industry leaders and policy makers in the future, he said.

Hydraulic fracturing, or “fracking,” is a key process for extracting oil and gas from underground shale formations. It involves injecting large quantities of water-based fluid into the shales (very fine-grained rocks) to fracture them, thereby releasing oil and gas. Most of the injected fluid, which includes various chemicals, does not return from the well when production begins. Research scientists and local residents near these fracking sites are concerned about the fluids potentially contaminating drinking-water aquifers.

“My work tries to determine where the fracking fluid goes after it is injected into the rocks,” said Edwards, who has been using computer models to simulate the fracking process.

“We start by building a conceptual model of what we think the shale formations look like,” said Edwards. “Our models are informed by a lot of data collected from the field and from lab experiments. We see what’s important to consider underground. Then we build a computer model that includes the geology and the physical processes governing fluid movement in the rocks.”

Edwards’ models show that fracking fluids injected into deep shale formations are not likely to get into drinking-water aquifers. Scientists have hypothesized that most of the fluid stays in the shale rock – a hypothesis supported by Edwards’ work. The rocks act like a sponge and retain the fluid.

“Long-term pervasive water movement is unlikely. Our models show that water is retained in the shale rock,” he said. “But we still have to be careful. There can be exceptions since geology is complex.”

Though his findings point towards little risk of environmental contamination from the underground fracking process, Edwards cautioned that contamination is possible if wells are poorly constructed. More research work is needed in this area, he said. Fracking has enabled a huge boom in oil and gas production over the past decade. With the development happening so quickly, the total impact of these processes on the environment is still cloudy. Continuing research in this area will better inform lawmakers and oil and gas companies in making better decisions for the environment, he said. Edwards hopes his year-long research funded by the Maeder fellowship will help in this matter. The research project itself has generated a few proposed papers he plans to write.

Beyond this project, Edwards wants to continue working on energy and climate issues, to help find solutions to these challenges, and to become involved in the policy-making process.