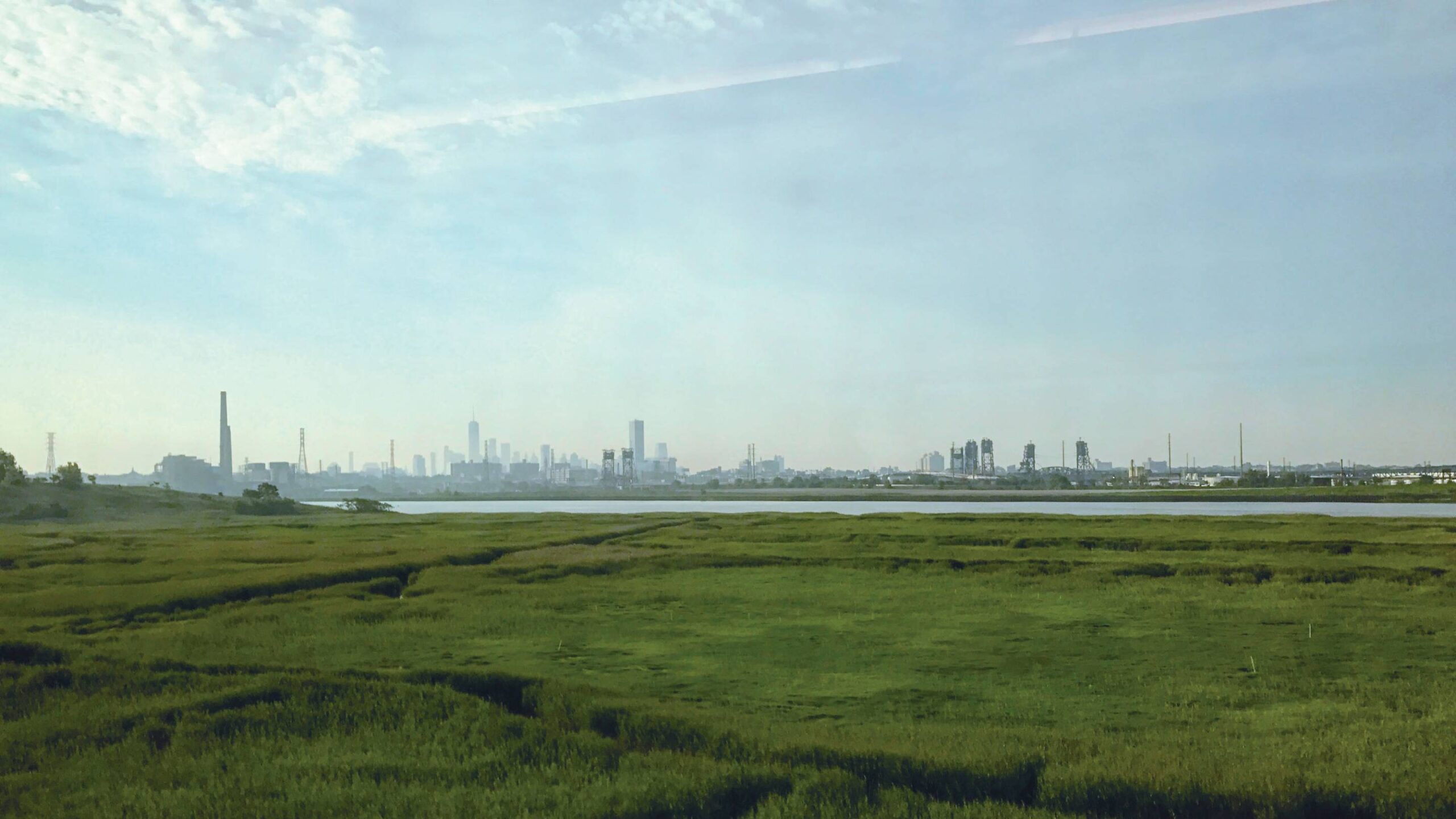 Mario Gandelsonas, Princeton’s Class of 1913 Lecturer in Architecture, professor of architecture, and director of the Program in Urban Studies, has been leading an assessment of the New Jersey Meadowlands (pictured) as a potential national climate park that would mitigate the effects of climate change. (Photo by Morgan Kelly, High Meadows Environmental Institute)

When it comes to understanding and protecting the environment, New Jersey provides fertile ground for Princeton University researchers. The state’s four geological regions and its mix of urban, rural and suburban communities allow Princeton faculty, staff and students to develop environmental and climate solutions on their home turf that address an array of global concerns.

“I think as scientists we want our methodologies and research to be very general, but it’s also very natural to study the impact to the areas around us,” said Ning Lin, associate professor of civil and environmental engineering. “I think it’s both of interest and also our duty to contribute to the area where we live and work.”

Princeton research now underway in New Jersey is studying the impact of coastal storms, extreme heat and even the action of wind turbines, guarding against lead contamination in cities, breaking down toxins with a bacteria native to the Assunpink wetlands, helping Garden State farmers, and more. Some key projects statewide:

While the increased development of offshore wind power in the United States — and along the coast of New Jersey, in particular — presents a significant source for renewable energy, more research is needed to understand its environmental impact.

Four Princeton engineering professors are developing a novel, multi-layer simulation of the atmospheric, surface and underwater turbulence created by offshore wind turbines to investigate their impact on local marine environments, with a focus on New Jersey, which is poised as a site for offshore wind turbines.

In a project supported by the HMEI Climate and Energy Challenge, the researchers are studying the environmental impact of underwater sediment plumes generated by wind turbines, which is still unclear. Thick clouds of sediment can prevent sunlight from reaching subsurface depths and disrupt the distribution of nutrients, potentially starving marine animals and plants, as well as harming breeding areas for the fish on which many coastal communities rely.

The researchers are also simulating and studying the interaction of the turbulent boundary layers between the atmospheric wake from wind turbines and the sea surface, and between the sea surface and subsurface flow, to understand the mechanism by which sediment is trapped.

Undergraduate summer interns are recruited each year to work with the team, along with a postdoctoral researcher.

Another aspect of their work, supported by a grant for innovative research in energy and the environment from the Andlinger Center for Energy and the Environment, includes identifying opportunities for boosting the efficiency of groups of offshore turbines, known as wind farms. The interaction of atmospheric turbulence and the sea surface determines the airflow that downstream turbines receive, so understanding these wakes could be critical.

Peter Jaffé, the William L. Knapp ’47 Professor of Civil Engineering and professor of civil and environmental engineering, is working with a microbe discovered in a New Jersey wetland that could degrade the chemical pollutant PFAS.

Researchers in Jaffé’s lab discovered the bacterium’s surprising ability to break down pollutants without using oxygen. This could offer a more efficient method than current, oxygen-based methods for treating toxins in sewage.

The bacterium, Acidimicrobiaceae bacterium A6, can break down ammonium, a pollutant found in sewage and fertilizer runoff. Jaffé and Shan Huang, an associate research scholar, discovered the bacterium in 2015 when studying samples taken from the Assunpink wetland near Trenton.

The Princeton team is exploring how to build a facility where A6 could be used to process ammonium at industrial scales. Support for the project was provided in part by the National Science Foundation and Princeton’s Project X Fund.

Mark Zondlo, professor of civil and environmental engineering, and Z. Jason Ren, professor of civil and environmental engineering and the Andlinger Center for Energy and the Environment, are leading a project through the HMEI Water and the Environment Challenge to quantify greenhouse gas emissions from wastewater plants in the Northeast, including New Jersey, where they’ve been collecting their samples using a specially equipped car.

Zondlo and Ren are conducting a pilot field study to measure emissions of methane and nitrous oxide — both potent greenhouse gases — from wastewater treatment plants. They will then assess the broader environmental impacts of these emissions and explore potential mitigation strategies.

The project uses an electric vehicle outfitted with air-quality monitoring equipment — known as the Princeton Atmospheric Chemistry Experiment mobile lab — to gather methane and nitrous oxide data from the areas surrounding 12 treatment plants in the Northeast of various capacities and treatment types.

Jesse Jenkins, assistant professor of mechanical and aerospace engineering and the Andlinger Center for Energy and the Environment, leads a team of Princeton researchers who have modeled several approaches to meet New Jersey’s policy goal of providing 75% of power from renewables and achieving a 100% carbon-free power supply by 2050.

Jenkins’ team at the Princeton ZERO Lab looked at three broad scenarios for the state and found varied results:

Recently, Jenkins described to lawmakers options to meet the state’s goals, outlined in a 2018 executive order from Gov. Phil Murphy to members of the New Jersey Senate Environment and Energy Committee.

The findings show that meeting New Jersey’s goal of procuring a carbon-free electric supply by mid-century is possible, even as peak electric demand is anticipated to grow by up to 85% from rapid building and vehicle electrification. “First and most importantly, a transition to 100% carbon-free electricity is feasible,” Jenkins said.

Lin is one of three Princeton faculty members modeling the impacts of hurricane hazards and extreme heat to inform a regional consortium as it works with communities and governments in New Jersey, New York City and Philadelphia to develop a climate-resilient decision-making framework that supports coastal communities.

The Megalopolitan Coastal Transformation Hub (MACH) is a five-year project funded through the NSF Coastlines and People Program. It brings together natural scientists, social scientists, civil engineers and humanists with coastal stakeholders and decision-makers to co-produce knowledge that can inform how coastal communities adapt to climate change.

Lin said local and regional stakeholder engagement is especially important in developing solutions from the research, which is being conducted with the support of several Princeton postdoctoral researchers and students. Michael Oppenheimer, the Albert G. Milbank Professor of Geosciences and International Affairs and the High Meadows Environmental Institute and director of the Center for Policy Research on Energy and the Environment, and Guy Nordenson, professor of architecture, are also instrumental in the project.

Lin, Oppenheimer and Nordenson have collaborated on regional coastal resiliency projects for many years prior to the formation of MACH.

Since 2016, John Higgins, assistant professor of geosciences, and Janet Currie, the Henry Putnam Professor of Economics and Public Affairs, have been working with the non-profit organization Isles, Inc. to measure the level and source of lead contamination in homes in Trenton and examine how those data correlate with childhood health and development. Over the years, the project — which is supported by the HMEI Urban Challenge — has engaged students through academic courses, most recently “Topics in Environmental Justice in the Geosciences,” offered this past spring.

In addition to working with Currie to correlate their data with childhood development, Higgins also spun off the research with Jennifer Jennings, professor of sociology and public affairs, into a project to test lead contamination in Trenton schools.

Through the schools’ partnership, test kits are linked to individual home addresses so that the researchers can identify high-risk areas for contamination, as well as work with individual households to report testing information and provide information for reducing lead exposure. In Higgins’ lab, Princeton students use chemical analyses to quantify local sources of lead contamination.

At the same time, Higgins and the students work with Trenton teachers to provide teacher training, classroom materials and lesson plans focused on avoiding lead exposure.

Higgins was inspired to initiate the Trenton project by the Flint, Michigan, water crisis of 2014 when more than 100,000 people were exposed to high levels of lead due to poor drinking-water treatment.

Through the HMEI Water and the Environment Challenge, Mario Gandelsonas, the Class of 1913 Lecturer in Architecture, professor of architecture, and director of the Program in Urban Studies, has been leading an assessment of the New Jersey Meadowlands as a potential national climate park that would mitigate the effects of climate change for the New York metropolitan area.

Located just west of Manhattan, the Meadowlands is one of the Northeast’s largest remaining tracts of urban open space and a crucial natural barrier against rising sea levels and storm surges, as well as a refuge for local wildlife and biodiversity.

The team is outlining the areas where trails, boardwalks and birdwatching sites can be safely developed, and they are examining how the park could be integrated with the surrounding urban infrastructure. They also will identify strategies for mitigating industrial pollution in the Meadowlands to prevent the spread of toxins by sea-level rise.

Another focus is inviting community engagement through public programs on the park’s design and the history of the Meadowlands, as well as through identifying how the park can be used to provide employment for surrounding communities. Finally, the team will identify sources of financial support and policy changes necessary for establishing the park.

Groundwork for the project, along with research and community engagement, was carried out by Princeton students through coursework, HMEI environmental summer internships and independent research.

Through coursework and internships, students are evaluating all manner of planting and cultivation — from the effectiveness of organic farming to the impact of different types of fertilizer and water delivery methods. They have evaluated the impact of wildlife, such as deer, on crop production. They’re also beginning to study the economics of New Jersey’s local farms, farm stands and markets.

Their experiments are helping local farmers to determine the most effective ways to manage their crops and earn a living.

“It becomes a positive feedback loop where the University, which is in the business of creating new knowledge and teaching students how to think and be creative, is also sharing that knowledge,” Rubenstein said. “This distinction between pure and applied research doesn’t have to remain a distinction. The two can work together.”

As Princeton’s campus phases out steam generation powered by fossil fuels for heating, it is implementing a new low-temperature heating water energy system driven by electric heat pumps, thermal storage and geo-exchange, which captures heat from inside campus buildings in the summer and stores that energy in the ground until it is needed again in the winter.

The University is one of the first sites in the nation to combine these technologies at this scale, allowing Princeton to model them for other institutions, corporations and government entities.

At the same time, Princeton researchers — including Forrest Meggers, associate professor of architecture and the Andlinger Center for Energy and the Environment and co-director of the Program in Architecture and Engineering — are testing and measuring the performance of Princeton’s new energy systems to benefit others in New Jersey and beyond who hope to implement these technologies in the future.

“We want to demonstrate the kinds of infrastructure and planning changes that are necessary at a much larger scale than just the campus,” said Shana Weber, director of Princeton’s Office of Sustainability.

Morgan Kelly, High Meadows Environmental Institute, and Molly Seltzer, Andlinger Center for Energy and the Environment, contributed to this story.