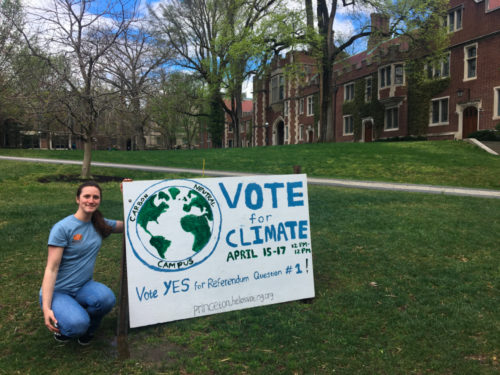 Claire Wayner is among 55 college sophomores and juniors nationwide named 2020 Udall Scholars by the Udall Foundation.

Wayner is a sophomore pursuing a degree in civil and environmental engineering and a certificate through the Andlinger Center’s Program in Sustainable Energy. She also is working toward certificates in environmental studies  and urban studies.

Wayner, who is advised by Ian Bourg, assistant professor of civil and environmental engineering and the Princeton Environmental Institute, considers climate change to be her generation’s greatest challenge and hopes to work in or with the federal government to decarbonize the global energy supply.

Last year, Wayner was a PICS intern at the Federal Energy Regulatory Commission (FERC) where she helped write legal briefs on the climate impact of natural gas pipelines and hydroelectric plants, as well as a 27-page paper on a policy approach to pricing carbon. This summer, she will study policy avenues for battery storage in South Asia at the National Renewable Energy Laboratory (NREL) through Princeton’s Scholars in the Nation’s Service Initiative.

On campus, Wayner actively works to reduce the University’s environmental footprint. She is president of the Princeton Student Climate Initiative where she spearheaded a student referendum to accelerate the University’s path to carbon neutrality, and met with University administrators to help implement the referendum. She later established a permanent USG sustainability committee. As an EcoRep through the Office of Sustainability, Wayner advises event organizers across campus on reducing waste and, as a PEI summer intern in 2019, volunteered with Princeton’s Engineers Without Borders-Peru team to complete a gravity-fed water system for the village of Pusunchás.

Wayner’s interest in environmental policy started as a high school student when she co-founded the non-profit group Baltimore Beyond Plastic, which grew to more than 300 members and succeeded in getting bans on Styrofaom passed in Baltimore and Maryland. She shared a 2018 Barron Prize for Young Heroes for her work.

“Receiving the Udall scholarship is a true honor, and I am grateful to all of those who have supported and mentored me along the way,” Wayner said. “I am looking forward to expanding on the environmental work that I’ve done thus far by continuing to study and advocate for a net-zero carbon future.”

Wayner was selected to be a Udall Scholar for her work related to the environment, one of two areas the Udall Foundation actively supports. The other is related to issues facing Native American nations. Scholars receive up to $7,000 and are selected based on their leadership, public service, academic excellence, and commitment to those issues.

The Udall Foundation is an independent federal agency founded in honor of U.S. Rep. Morris Udall and his brother Stewart Udall — U.S. Rep. and Secretary of the Interior under presidents John F. Kennedy and Lyndon B. Johnson — whose careers had a significant impact on Native American self-governance, health care and stewardship of public lands and natural resources.

This article first appeared on the Princeton Environmental Institute website.

Molly A. Seltzer edited this article for the Andlinger Center’s website.