Over the last several years, installations of wind and solar energy have grown rapidly in the U.S. and abroad with decreasing capital costs. Wind power in the U.S. produced 226.5 terawatt hours of electricity in 2016 compared to 34.5 in 2007, according to the U.S. Department of Energy.  Solar power production in the U.S. also ramped up as photovoltaic installations doubled from 7,500 megawatts in 2015 to 14,600 megawatts in capacity in 2016, according to news reports. Other countries, such as China and Germany, have raced to add renewables to their electricity portfolio as well.

Many researchers, renewable energy advocates, and organizations are pushing for 50 to 100 percent renewable energy, the bulk of which are projected to be wind and solar power. But challenges arise when an electric grid, which is expected to provide a steady stream of electricity to its customers, increasingly relies on these intermittent renewable energy sources. 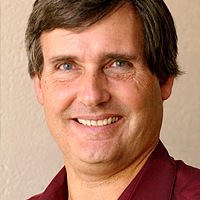 To explore these challenges, we interviewed Warren Powell, professor of operations research and financial engineering, and director of the Program in Engineering and Management Systems at Princeton University in our latest “The Andlinger Center Speaks.” An associated faculty member of the Andlinger Center for Energy and the Environment, Powell specializes in developing mathematical models of complex systems under uncertainty. He has designed algorithms to model the logistics of the transportation industry (i.e., trucking and railways).  Powell also collaborated with researchers at the University of Delaware to study the impact of the penetration of offshore wind power on the electric grid controlled by PJM Interconnection, LLC, a regional transmission organization that serves the mid-Atlantic region out to Chicago.

Could you explain how power companies make sure the electric grid is working correctly?

Most of our energy comes from fossil fuels with about 20 percent coming from nuclear power. Electricity generation from nuclear power is planned a year in advance because these plants run on a fixed schedule that allows for maintenance downtime.

A day in advance, power companies calculate and plan how much coal and natural gas they need to burn to generate electricity in steam-electric power plants, which boil water to turn steam turbines. On the day of, power companies use gas-powered turbines or combined-cycle power plants, a more energy-efficient plant that uses both gas and steam power, to generate extra electricity beyond what was planned in order to accommodate any variations in energy demand.

If we look at PJM, they have automatic generator controls that tune the generators, ramping up and down to compensate for variations in power, energy consumption, or generation, including variations in solar. That’s why our lights don’t flicker when large power consumers, such as air conditions, turn on, or when clouds decrease sunlight for solar photovoltaic use.

These controls keep the voltage variations to an acceptable, narrow range.

What happens when you add wind and solar power into the electric grid?

You have to take into account the intermittency of wind and solar energy. As you bring in more and more renewables, things happen that you did not plan. If we look at wind, we have to burn extra fuel for reserve because wind can suddenly dip unexpectedly. The U.S. electric grid can handle the variations in renewable energy now because they represent a small portion of total generation. About five percent of electricity is generated by wind while solar accounts for about one percent. When the wind dies down or the cloud shadows the sun, these automatic controls trigger the power plants to kick in to smooth out these variations in electricity generation from these renewable energy sources. This smoothing out is going to become increasingly a challenge with the increased penetration of wind and solar.

More research is needed, but when more than 20 percent of energy on the grid comes from renewables, our models show that we need to generate a considerable amount of reserve power for back up, which offsets some of the benefits of renewables. We need more than just these automatic controllers on fossil generators to balance the variability. So this means that in order to have more wind or solar power, we also need to burn extra fossil generators just to be ready for the moments that the wind dies down or when the clouds shadow the sun.

Germany is already at 35 percent renewable energy, and they are having problems handling this variability. At these renewables penetration levels, cloud cover can make the grid unstable. So Germany has had to install new technologies to help control these sharp drops in supply. Nuclear power has provided base load in the past but with Germany moving away from nuclear power, they have been using coal-burning power plants to handle the variability of renewables.

How about other countries, such as Brazil and Denmark?

Brazil derives 80 percent of electricity from hydroelectric power plants and are running out of hydro power capacity because of population growth. Fossil fuel is not an option in Brazil. They don’t have a lot of coal, and oil is too expensive. They have turned to wind power because it’s the cheapest. Brazil has a long history planning hydroelectric power in the presence of uncertain rainfalls, but they do not have our experience in modeling wind variations on a much finer time scale.

Denmark is getting as much as 50 percent of their energy from wind, but they are the size of northern New Jersey, and they have Norway in their back pocket. Norway provides reserve power in the form of hydroelectric dams.

There is a threshold for intermittent renewables, such as wind and solar, in an electrical grid, depending on locality.

In the U.S., the base load power is fossil fuels. But each region in the country has varying levels and different types of renewable energy sources, depending on geography and policies. Texas has a big wind energy industry. In Florida, sugarcane can be grown for biofuels.

Can batteries act as reserve?

Battery storage cost is coming down, and it’s getting better with higher densities and faster charging. It’s still a little bit of an open question how far you can go on battery storage.  Batteries are used primarily for smoothing voltage variations (known as frequency regulation) rather than shifting energy from summer afternoons to evenings.  Those batteries have to be much bigger, and they are currently expensive.

What predictions do you have on the wind and solar power?

We are going to realize we are not going to get 100 percent renewable energy. It would be very hard to get to 50 percent. It will get more expensive as we approach 20 to 30 percent because we will need to burn more fossil fuels for reserve power and install more batteries. The marginal cost of batteries can become quite expensive, especially with solar. For a solar installation, you can put in a Tesla Powerwall, which will provide some benefit as the base battery for the bulk of energy generated. Any additional batteries installed are used intermittently, storing energy only on extremely sunny days. These additional batteries cost the same as the first Powerwall, but because you don’t use them as much as the first battery, this setup will raise the marginal cost per kilowatt-hour delivered. Buying a battery just for those occasional times increases the marginal cost.

All energy grids run on the available lowest cost energy because customers don’t want to pay more than what is necessary, and private energy companies have a mission to maximize returns to their investors. We will keep on increasing renewable energy and riding the cost curve up until it stops making sense for energy customers and investors.

What’s the other 80 percent if we hit a wall of 20 percent intermittent renewable energy?

I would not say that 20 percent is a wall – rather, this is where the cost curve will start climbing.  We can work to get this cost curve down, but the curve is unavoidable, and we need to remain open to other alternatives.

Short term, it will be natural gas in the U.S. It’s cleaner than coal, but is still a fossil fuel. But it’s an important transitional fuel, which will help move us from coal.

Standard nuclear power comes to mind, but we are closing down nuclear power plants across the world. I don’t know what the answer is – so my answer is that we need all hands on deck. We need everybody with an idea to start. I don’t think it’s one solution.

Fortunately, we have a massive engineering community that’s working on solutions that we desperately need. Within this community, a new, unforeseen technology may come out that will work and become a whole industry. We have to go full bore in all directions when it comes to research because I think we are going to hit a wall with wind and solar maxing out. At 20 percent, it may start to hurt. At 30 percent, it will really hurt.