Without guidance, Inflation Reduction Act tax credit may do more harm than good 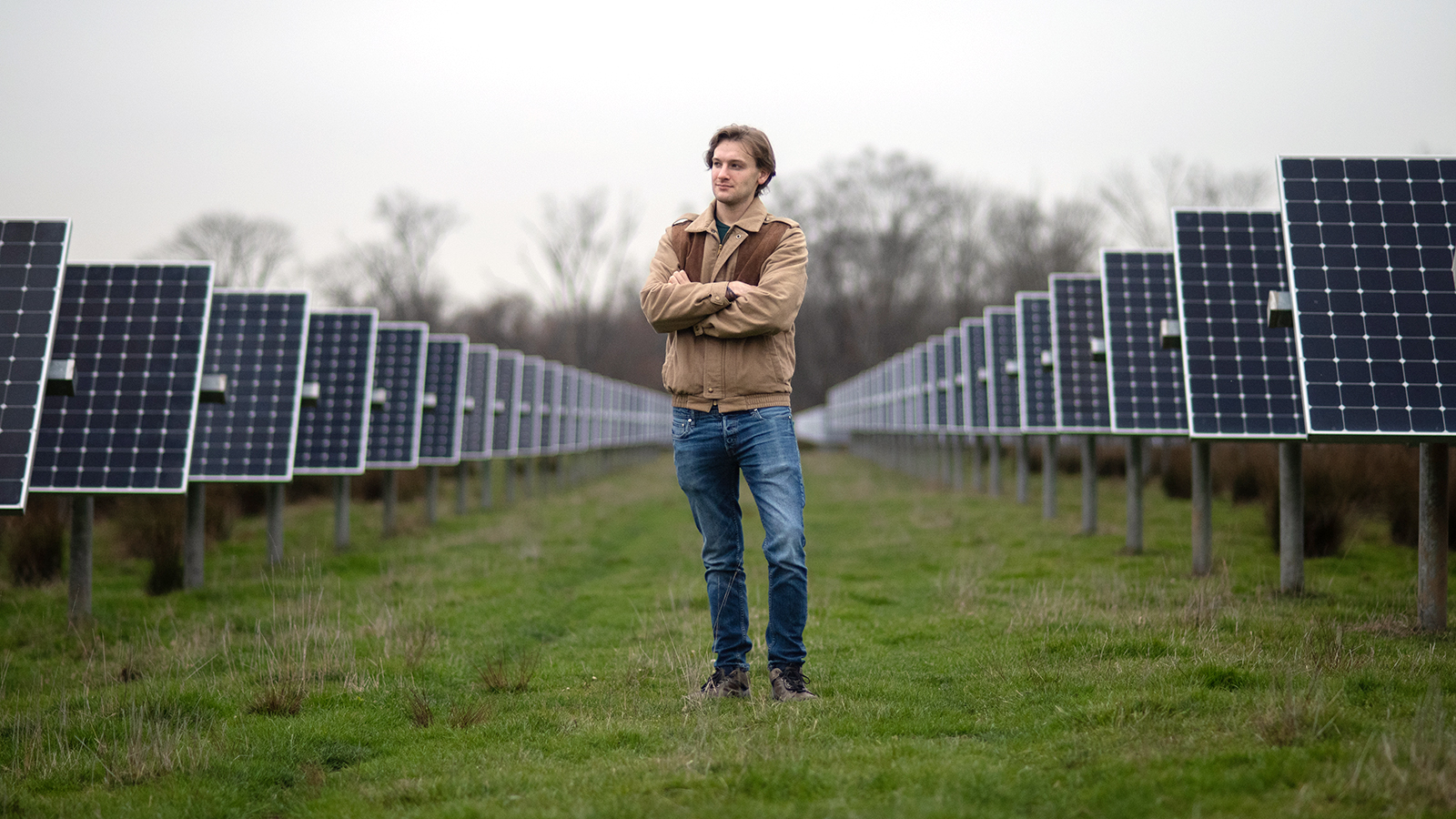 Wilson Ricks, first author of the study, at the solar array at Princeton University. (Photo by Bumper DeJesus)

Without guidance, Inflation Reduction Act tax credit may do more harm than good

The Inflation Reduction Act established a tax credit to kickstart hydrogen production in the U.S. But without careful implementation, the credit could backfire by inadvertently increasing nationwide carbon pollution.

Since hydrogen does not release carbon when burned, it is an attractive option for such uses as powering fuel cells and transporting carbon-free energy over long distances.

But while hydrogen itself does not release carbon, the processes used to produce it are often carbon-intensive. For example, today’s most common production method uses natural gas to make hydrogen through a process known as steam methane reforming.

The new production tax credit aims to help implement cleaner methods for making hydrogen. Among the leading alternative technologies is electrolysis, which requires only electricity to split hydrogen from water.

New research from Princeton’s ZERO Lab led by Jesse Jenkins, assistant professor of mechanical and aerospace engineering and the Andlinger Center for Energy and the Environment, argues that the source of the electricity used for electrolysis matters. If the energy comes from fossil fuel or coal generators, widespread electrolysis could lead to more nationwide carbon pollution than today’s steam methane reforming.

“This tax credit makes it economically attractive to expand electrolysis-based hydrogen production across the U.S.,” said Jenkins. “But we need to be mindful that it’s implemented in a way that actually accomplishes its goal of promoting low-carbon hydrogen production.”

Consequently, by modeling the grid-scale impact of electrolysis, the ZERO Lab identified three key implementation guidelines for the tax credit that would require grid-based hydrogen producers using electrolysis to procure clean energy in a way that moves the nation toward, rather than away from, its emissions targets. With these procurement guidelines in place, the researchers found a way to enable grid-based electrolysis with minimal carbon pollution.

Their work was recently published in Environmental Research Letters. They also submitted comments to the U.S. Department of the Treasury and the Internal Revenue Service to provide decision-making support on how to implement the hydrogen production tax credit created under section 45V of the Inflation Reduction Act.

Wilson Ricks, the paper’s first author and a graduate student in mechanical and aerospace engineering at Princeton, pointed out the obstacles to using electricity to generate hydrogen. Currently, fossil fuel and coal plants still supply much of the electricity for the U.S. electrical grid. And since there is no way to track individual electricity flows through the grid from generator to consumer, any grid-connected hydrogen producer would indirectly generate large amounts of carbon emissions simply by increasing the overall energy demand. This is especially true because the tax credit pays hydrogen producers based on the amount of hydrogen they produce, encouraging them to operate close to 24/7.

That leaves hydrogen producers who want to qualify for the full tax credit with two options: either they must supply their own carbon-free electricity without connecting to the grid by co-locating resources like solar farms alongside their electrolyzer, which poses many spatial and logistical constraints, or they can connect to the grid and find some way to demonstrate that they are using carbon-free electricity from clean sources.

The current carbon accounting approach, known as annual or volumetric matching, requires a grid-connected company to examine its annual energy usage, calculate the total megawatt-hours of electricity used, and procure an equivalent amount of clean energy that was produced at any time during the same year.

In the paper, though, the researchers argued that the current accounting method does not fully consider the scope of emissions embodied in grid users’ energy consumption. When Ricks and Jenkins, along with fellow co-author Qingyu Xu, a former postdoctoral researcher with the ZERO Lab who is now a researcher at Tsinghua University, modeled the system-wide impacts of implementing the hydrogen tax credit alongside the existing clean energy procurement approach, they found that the approach did little to reduce carbon emissions from grid-based electrolysis.

However, they found that they could minimize the emissions impact of grid-based hydrogen production by enforcing additional guidelines for clean energy procurement alongside the tax credit. The findings built off previous work in collaboration with Google, a member of the Princeton E-ffiliates Partnership, on 24/7 carbon-free energy procurement, which identified ways to improve current accounting practices to better reflect the carbon emissions embodied in the grid’s electricity.

First, the current accounting approach only requires producers to procure energy on an annual basis, but the researchers argued that hydrogen producers should be required to procure clean energy on an hourly basis to match their consumption during that hour, which better accounts for daily variations in grid emissions.

Overall grid emissions are generally lowest during the daytime, when resources like solar farms supply a stream of clean energy, and are higher at night, when fossil fuel and coal generators supply more of the grid’s electricity.

Consequently, a hydrogen producer using electrolysis, incentivized to operate at all hours of the day, would likely rely on fossil fuels for extended periods of time. By requiring producers to procure clean energy on an hourly basis, an approach being explored by companies like Google and Microsoft as well as the U.S. government, they would be more accountable for the energy sources they use at any given time.

Second, the researchers specified that to qualify for the tax credit, hydrogen producers must procure electricity from newly built clean resources beyond those required to meet state-mandated clean energy goals. If hydrogen producers only procured renewable energy from pre-existing sources, which would be possible under the existing paradigm, they would increase the overall demand for energy without contributing to new projects that expand the clean energy supply. In many cases, that would spur fossil fuel and coal generators to supply the deficit.

Lastly, the team found that procured clean energy must be from sources close enough to the producer to be deliverable. Because of transmission bottlenecks in the grid, electricity is limited in the distance it can practically travel. As a result, the researchers found that allowing the procurement of far-away clean energy resources, which is possible with today’s accounting approaches, did nothing to limit system-wide carbon emissions.

Ricks explained that even if a producer claims to pay for electricity from a non-local source, their overall demand might be met by a nearby fossil fuel or coal plant due to transmission constraints between the clean generator and the electrolysis facility. By implementing a deliverability requirement, hydrogen producers would be required to procure clean energy from sources within a practical distance.

When the researchers implemented these three requirements alongside the tax credit, they found that grid-based hydrogen producers would have a comparable impact on grid emissions as hydrogen producers who supply their own clean electricity without connecting to the grid.

Even with the requirements in place, there are still some circumstances in which adding hydrogen demand leads to higher grid emissions. That is because demand from electrolysis may compete for the best renewable energy sites, and as those sites get used up, fossil generators may become more competitive. However, Jenkins noted that the same issue applies to clean hydrogen producers who do not connect to the grid.

“Given the incentives created by the production tax credit to deploy electrolysis, there is no real way to ensure zero consequential emissions in all cases,” Jenkins said. “But we can ensure the lowest consequential emissions of the procurement strategies we explored and comparable outcomes to an off-grid electrolysis facility powered exclusively by clean electricity.”

When the researchers removed any of the three requirements, though, system-wide emissions shot up. Without the proposed guidelines, the tax credit would ultimately subsidize a production process that would increase emissions, which Ricks said could be a disaster for the credibility of the nascent clean hydrogen sector and overall decarbonization policy.

“Even with current high electrolyzer costs, complying with our recommendations should be profitable in many regions across the country,” said Jenkins. “If we assume further cost declines, which are likely in the coming decades as one of the intended impacts of the hydrogen subsidy, producers could meet these guidelines on an even wider scale.”

The article, “Minimizing emissions from grid-based hydrogen production in the United States,” was published on December 19 in Environmental Research Letters. Princeton University’s Low-Carbon Technology Consortium supported the work, which is funded by gifts from Google, GE, and ClearPath.