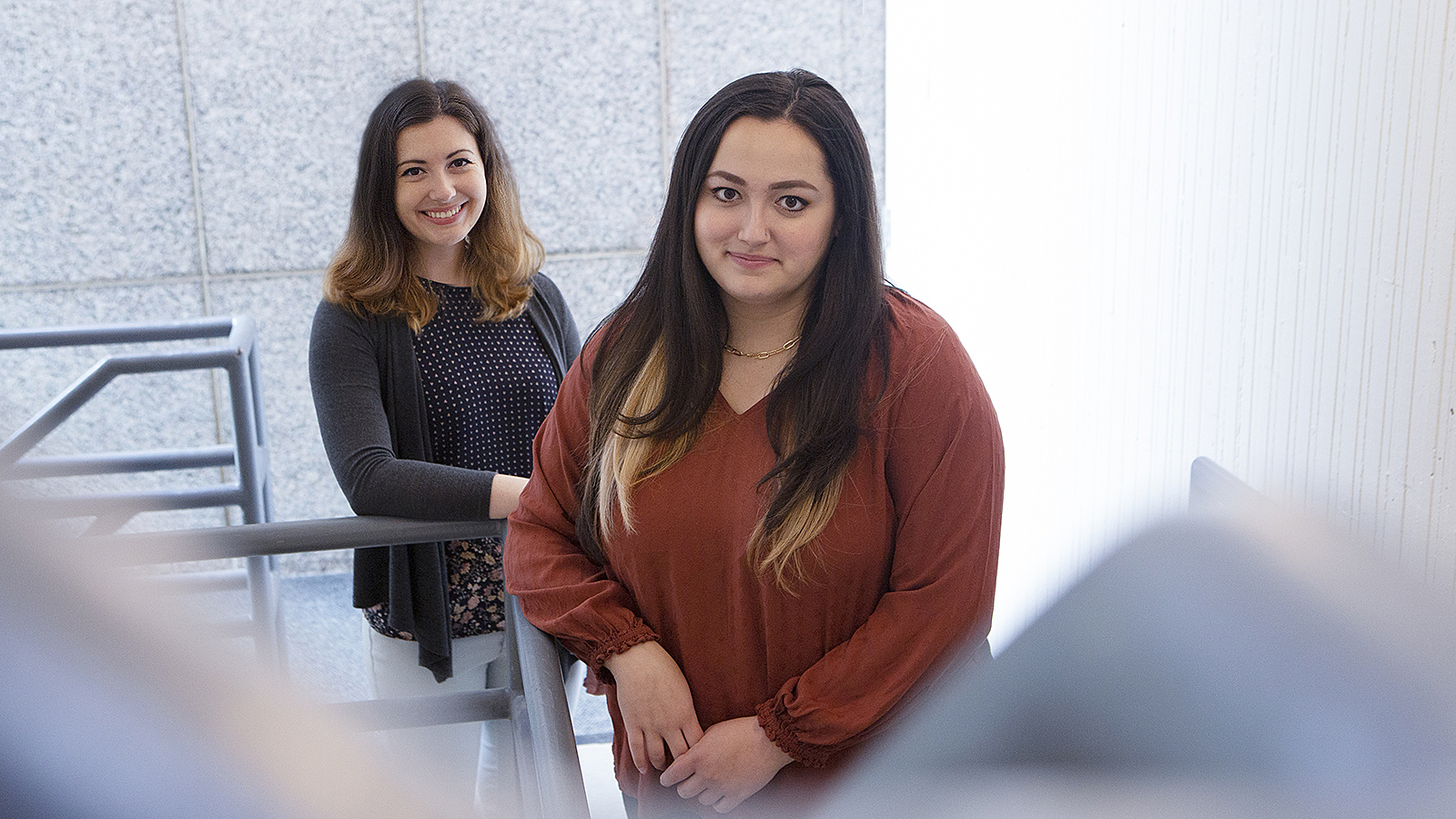 Projects aimed at reducing greenhouse gas emissions from livestock and using nanoparticles to clean groundwater have earned support from the Maeder Graduate Fellowship in Energy and the Environment.

Shannon Hoffman and Joanna Schneider, both graduate students in chemical and biological engineering, will receive one year of funding supported by the Paul A. Maeder ’75 Fund for Innovation in Energy and the Environment. Their fellowships cover tuition and stipends for the 2022–23 academic year.

To curb greenhouse gas emissions associated with livestock, scientists have begun cultivating animal proteins in the lab without the use of animals. These cultivated meats are typically made using specially engineered yeast. But even the best yeast strains today still feed on substantial amounts of methanol, meaning the process still relies on fossil fuels.

Hoffman hopes to change that.

She has pioneered a tool that controls the yeast using light rather than methanol, further lowering the environmental footprint of cultivated meats and making them even more sustainable than the current generation.

“If we can find a way to produce meat and avoid the problems associated with livestock, that would make a huge difference, especially as the world looks for ways to address climate change,” she said.

Hoffman said the Maeder fellowship will allow her to address a small but important piece of a global grand challenge: feeding eight billion people while easing society’s impacts on the planet. Livestock account for a significant portion of human-induced greenhouse gas emissions, according to the United Nations, with methane from cattle contributing the most from that sector. Reducing the number of livestock required to meet demand would directly lower the amount of heat-trapping gases released into the atmosphere each year.

Hoffman and her adviser, José Avalos, associate professor of chemical and biological engineering and the Andlinger Center for Energy and the Environment, forecast that their light-based tool can make as much meat protein as leading methanol-based methods. And it can do so in less time, making it appealing on an industrial level.

Hoffman hopes to extend the tool to produce dairy proteins that could eventually reduce human reliance on livestock for milk. The same light-activated tool could be tuned to make a wide range of biological materials, Hoffman said, including mussel-like adhesives and spider-like silks: as strong as steel and as flexible as nylon.

Groundwater aquifers supply drinking water to more than half of the U.S. population, but these underground reservoirs are vulnerable to contamination by industrial waste. Schneider is developing a technique to target, degrade and remove such contaminants using specially designed nanoparticle mixtures.

Chemical pollutants such as chlorinated solvents, which are discharged by industrial processes and improper waste disposal, pose an especially difficult problem in sensitive environments. Such chemicals don’t dissolve easily and get stuck in the pores between rock surfaces. Clean water initiatives need tools to dislodge the pollutants from these tiny, underground spaces.

Schneider said the Maeder fellowship provides a chance to develop the tools to take on this critical issue. For her, it’s not only a scientific concern. It’s a matter of justice.

“Cleaning up groundwater is essential to sustaining a healthy population,” Schneider said. “It is everyone’s right to have access to clean water, so we need to be able to trust that the water coming out of our tap is safe.”

To tackle the problem, Schneider combines the expertise of her two co-advisers, Sujit Datta, assistant professor of chemical and biological engineering, and Rodney Priestley, the Pomeroy and Betty Perry Smith Professor of Chemical and Biological Engineering. Where Datta specializes in understanding how complex fluids flow through the porous structures found in aquifers, Priestley specializes in designing nanoparticles with mechanical and chemical properties that are highly tuned to a desired macroscopic effect.

While existing aquifer remediation techniques work in some rocks, they fail in others. Once loosened, contaminants migrate and disrupt surrounding ecosystems. Schneider hopes to find techniques that protect the waterways, plants and fish that are vulnerable to these failures. Her work as a Maeder fellow will combine experimental visualization, computational tools and new approaches to engineer particles that safely spread through the aquifers as they clean them.

“Nanoparticles are a more viable long-term solution to cleaning contaminated water,” she said.

The Paul A. Maeder ’75 Fund for Innovation in Energy and the Environment supports the Maeder Fellowship, awarded to one or two graduates each year who demonstrate potential to develop technical solutions to sustain our energy and environmental future. The Andlinger Center for Energy and the Environment administers the fund and fellowship. More information on the program and past recipients can be found on the Maeder Graduate Fellowship page.