Princeton: A half-century at the environmental forefront

Yueh-Lin (Lynn) Loo’s moment of clarity came while sitting at a long wooden conference table at Princeton University’s Maeder Hall Auditorium. The director of the Andlinger Center for Energy and the Environment was leading a meeting with a renowned Princeton political scientist, psychologist, economist and esteemed engineering colleagues, who were all gathered to discuss a massive problem: how to provide energy to the world while simultaneously eliminating greenhouse gas emissions.

“I got goosebumps along the back of my neck,” said Loo, the Theodora D. ’78 and William H. Walton III ’74 Professor in Engineering and professor of chemical and biological engineering.

“Seeing so many experts at the table, many of whom had never worked on energy before, showed me that we had built something whose sum was greater than the individual parts,” said Loo.

The scene took place in June 2019 at the inaugural workshop of Rapid Switch, an international research collaboration spearheaded by the Andlinger Center. Its focus is accelerating decarbonization efforts globally, region by region and sector by sector.

The threads of energy and environmental research

Fifty years before that meeting in Maeder Hall, in 1969, a similar new collaboration was being forged at the University. A wave of energy and environmental problems were coming to bear in the United States, from the Cuyahoga River fire to the Santa Barbara oil well blowout. Universities were grappling with how to respond.

Princeton University President Robert F. Goheen learned about a young physicist, an assistant professor at Yale University, with a passion for environmental issues. The professor had just published a book, “Patient Earth,” and was looking to move from the abstract realm of physics to research that would more directly protect the planet. Robert Socolow was recruited to build a multidisciplinary research program on energy and the environment, the first of its kind at the University.

“Princeton’s offer could not have been more exciting to me; building an interdisciplinary center was exactly what I wanted to do,” said Socolow, now professor of mechanical and aerospace engineering, emeritus. What became the Center for Energy and Environmental Studies (CEES) was formally founded in 1971 in the School of Engineering and Applied Science, as Robert Jahn became its dean. Irvin Glassman, a former professor of mechanical and aerospace engineering, during his tenure as CEES director put the center on the campus map.

According to Socolow, the University’s response to the environmental issues of the day was “unusually robust.” He said other Ivy League institutions were not looking to invest in a tenure-track faculty member with an environmental mission.

Robert Williams, a senior research scientist, emeritus, and founder of CEES’ Energy Systems Analysis Group, and Frank von Hippel, professor of public and international affairs, emeritus, and senior research physicist, led the burgeoning research areas — energy systems and energy security. With increased interest in conservation and nuclear power after the 1973 oil crisis, the researchers made recommendations on nuclear security, and demonstrated the economic and environmental benefits of cogeneration in power plants.

The center’s research paved the way for the passage of the Public Utility Regulatory Policies Act (PURPA), which promoted energy conservation and deregulated the electric industry in favor of competition among electric producers. The center’s research ranged from developing the study of energy use in buildings to evaluating energy use and fuel efficiency for the automobile industry to sustainable global development, with close collaborations with top researchers in Brazil, India and Europe. In 1993, Williams and von Hippel were named MacArthur “Genius” Fellows. It was the first time two scholars from the same academic unit of any university were recognized at the same time with this honor.

The power within the sun

During the same period, Princeton University became a leader in the field of nuclear fusion, the source of energy that powers stars, including the Sun. In 1951, Princeton astrophysicist Lyman Spitzer met with the Atomic Energy Commission and proposed a method for controlled fusion on Earth. Realizing that fusion could become an inexhaustible energy source, the Commission greenlighted the project. After being declassified in 1958, the program became the Princeton Plasma Physics Laboratory, a U.S. national lab managed by Princeton University.

PPPL was the first in the world to produce substantial amounts of fusion energy, generating 10 million watts of power with a core fusion temperature of 250 million degrees Celsius in 1994.

The draw of fusion energy today is that it could be a nearly limitless source of carbon-free energy that would help the United States and world lower its carbon footprint by weaning energy systems off of oil, coal and gas. PPPL is currently working to develop strategies to lay the groundwork for commercializing fusion in the latter half of the century, while collaborating on the world’s most advanced fusion reactor, the International Thermonuclear Experimental Reactor, or ITER, which is under construction in France.

In the late 20th century, the focus among scientists tracking environmental problems shifted to another issue: carbon dioxide. Fears around whether fossil fuels would run out, whether they would be affordable, nuclear accidents, and air and water pollution, were slowly overtaken by concerns of the greenhouse effect on the global climate.

“We were beginning to understand that everyday human activities could overwhelm the earth,” said Socolow.

Robert Williams, of the Energy Systems Analysis Group, recognized that carbon dioxide could be removed from the flues of power plants and stored instead of being released into the atmosphere. Geologists identified that there was adequate geological storage underground, which environmentalists regarded as a safer option compared to ocean storage. Williams and Socolow caught the attention of BP, which was looking to the academic community for support in this area. They teamed up with Stephen Pacala, the Frederick D. Petrie Professor in Ecology and Evolutionary Biology, and their proposal to BP was chosen over proposals from Stanford and MIT.

“Very few people at Princeton thought we could beat Stanford and MIT,” said Socolow. “But we presented ourselves as looking at a whole environmental problem, not at narrow parts of it.”

BP awarded the multi-million-dollar grant to Princeton, which established the Carbon Mitigation Initiative (CMI) in 2000 as part of the Princeton Environmental Institute. To this day, CMI research focuses on advancing measurements and modeling of atmospheric, ocean, land and ice biogeochemical processes along with energy technology and integration to address the carbon and climate change problem.

­­­­In 2007, the Intergovernmental Panel on Climate Change (IPCC) issued its fourth assessment report, which presented the scientific consensus around climate change and pointed to human activity as the cause.

For Emily Carter, who was then a Princeton professor of mechanical and aerospace engineering and applied and computational mathematics, it was the first time the IPCC report unequivocally convinced her that human beings are having a profound effect on the climate. At that moment, Carter, a chemist and physicist by training, shifted her entire research program to focus on sustainable energy. Carter made the decision to be very intentional with her work, and ensure that every grant she wrote was “making use of my expertise to try to get us off of fossil fuels, to work on sustainable energy technologies,” said Carter in an interview for the She Roars podcast.

At the same time, University leadership saw the need to redouble efforts to contribute meaningfully to the pressing issues of energy and climate, as it had done for the environment, under president Harold T. Shapiro more than a decade before with the founding of the Princeton Environmental Institute.

Shirley M. Tilghman, president of the University, emeritus, said she knew that the University had to act, and “it had to be dramatic and significant.”

“If we were a serious research university in the 21st century, we had to have a strong presence in the field of energy research,” said Tilghman, who is also a professor of molecular biology and public affairs, emeritus.

Tilghman found the support she needed to launch a new effort in alumnus Gerhard R. Andlinger of the Class of 1952, a businessman and philanthropist, who donated $100 million to establish the Andlinger Center for Energy and the Environment in 2008. Its mission was to create solutions for energy and environmental problems, and Carter would be the founding director.

Carter charged ahead with confidence, bringing to life the vision of a pan-University center dedicated to developing solutions, with a focus not just on engineering, but also on policy and human behavior. She sought out every relevant department to participate and collaborate with the center through grants, partnerships and recruitment efforts. The Andlinger Center brought in  joint-appointed faculty members who worked on solutions ranging from low-carbon cements to technologies for improved power delivery to frameworks for environmental decision-making. 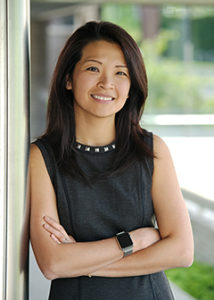 Loo strategically focused on external engagement and high-impact projects, and guided the research community to work on what she saw as the practical, unanswered questions of the century. She incorporated the Energy Systems Analysis Group into the center. She challenged researchers to identify pathways to decarbonization that are feasible and effective in all parts of the world, including areas still ramping up access to energy for growing populations.

The center also developed and launched the University’s first executive education program, aimed at equipping decisiomakers to think critically and creatively about their roles in solving environmental and climate problems and to guide their organizations in support of this. In his opening remarks to the participants in 2018, Princeton University President Christopher L. Eisgruber said that the program, executed in collaboration with the World Economic Forum for its class of Young Global Leaders, exemplifies the University’s increased commitment to partnerships that bring together the academy and entrepreneurial sectors to drive impact and progress. The center continues to investigate and assess new ways for countries, communities and companies to thrive while protecting the environment and mitigating climate effects.

Five decades after Socolow’s initiative helped lay the foundations for modern environmental research and a decade since the Andlinger Center’s establishment, Loo takes pride in the community the Andlinger Center has built and everyone who continues to join.

With Rapid Switch, Loo hopes to bring all necessary specialties together to expand global energy access and stymie climate change, building on a strong history of collaboration and action in this realm. No individual research group, or even whole institution, will have all the expertise to solve the complex challenges, “but what I can do is bring people together,” Loo said.