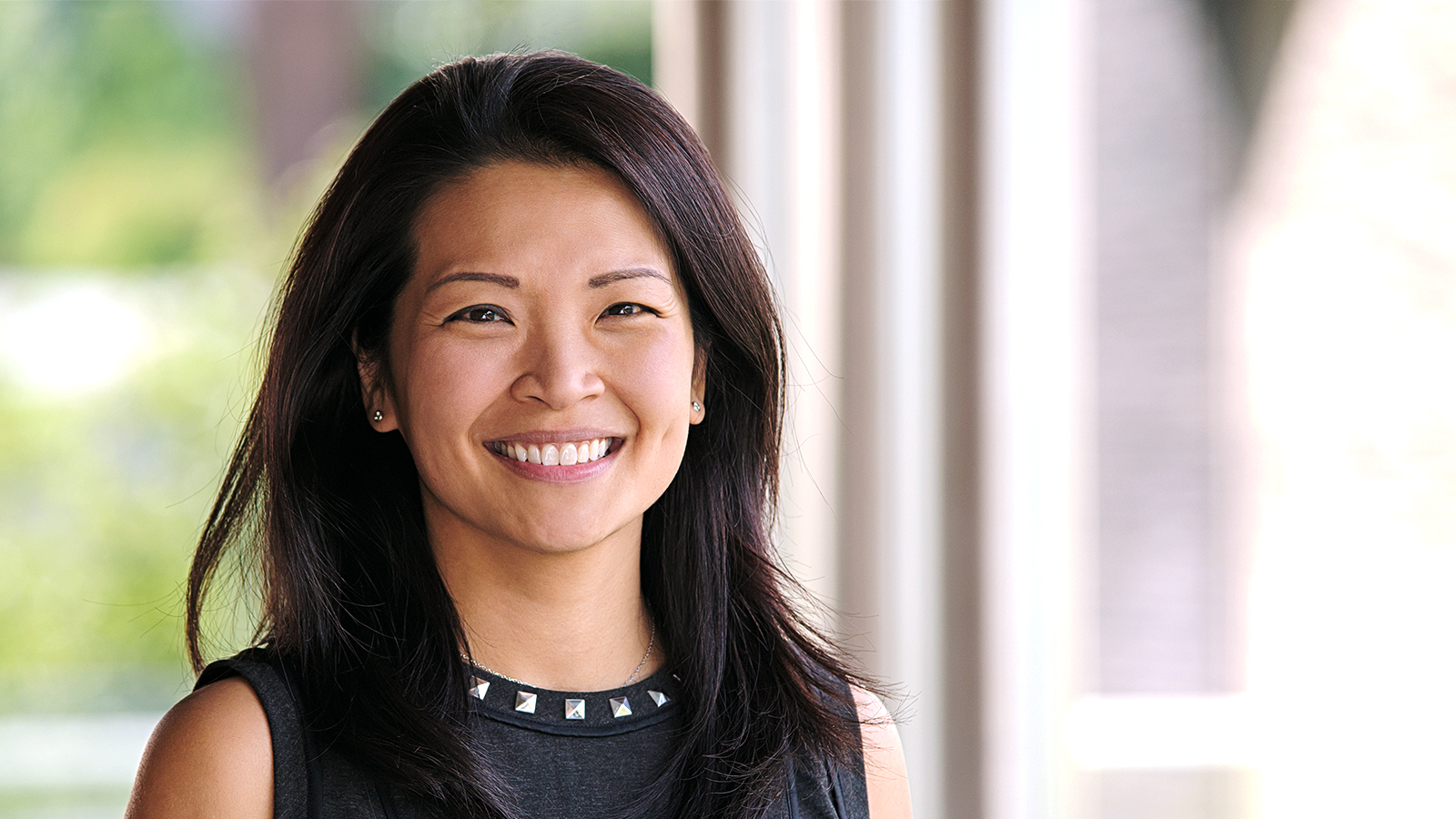 Andlinger Center director, Lynn Loo, will step down as director and join the newly founded Global Centre for Maritime Decarbonisation, based in Singapore, as its first chief executive officer.

Loo, who is also the Theodora D. ’78 and William H. Walton III ’74 Professor in Engineering and professor of chemical and biological engineering, will take a two-year leave from Princeton University to fulfill this new role, effective August 1, 2021. Claire Gmachl, the Eugene Higgins Professor of Electrical Engineering and associate chair of the Department of Electrical and Computer Engineering, will serve as the interim director of the Andlinger Center.

Loo, who began her tenure as Andlinger Center director in 2016, has sharpened the center’s focus on energy systems research and deepened engagement with people and companies outside of academia to solve energy and environmental problems across sectors. Now, she will work on testing and implementing energy technologies to reduce emissions in the shipping sector, collaborating with maritime stakeholders and research centers across the world in technology and research pilot projects. The Global Centre for Maritime Decarbonisation was established with an initial fund of $120M SGD ($90M USD) from the Maritime and Port Authority of Singapore (MPA) and six founding partners.

In spring of 2020, Loo began a sabbatical in Singapore during which period she sat on the International Advisory Panel (IAP) for Maritime Decarbonisation to evaluate how the shipping sector could lower its emissions. The establishment of a global decarbonization center was first announced in April 2020 as one of the recommendations in the IAP’s report to the Singapore government. After a global search, the founding partners selected Loo to lead it. The new Global Centre for Maritime Decarbonisation will complement existing organizations in this space by facilitating decarbonization technology development and test-bedding, including future marine fuel trials with the industry and research communities in Singapore. Loo will develop a strategic plan for the organization, and implement it, much like she did for the Andlinger Center.

Loo, a chemical engineer, also runs the organic and polymer electronics laboratory at Princeton, and is working to develop a transparent solar cell to place over and provide onboard power to operate smart windows. She is cofounder of the startup Andluca Technologies that seeks to commercialize the technology.

“Lynn Loo’s outstanding research and civic engagement have made her an internationally respected scientific leader on issues of climate change.  As CEO of the Global Centre for Maritime Decarbonisation, she will have an even more direct impact on the most critical environmental issues facing humanity,” said Princeton University President Christopher L. Eisgruber.

“I am grateful for her service to Princeton, and I am confident that she will represent the University superbly in her new role,” said Eisgruber, who is also the Laurance S. Rockefeller Professor of the Princeton School of Public and International Affairs and the University Center for Human Values.

In the past five years, Loo strategically focused on external engagement and high-impact projects, guiding the research community to work on practical and foundational questions needed to address climate change in the 21st century. She challenged researchers to identify pathways to decarbonization that are feasible and effective in all parts of the world, including in places like India and China where population and quality of life are increasing, which often comes with more carbon emissions.  She saw energy systems as key to doing this, and she incorporated the Energy Systems Analysis Group (ESAG) into the center. Loo also recruited researchers with deep knowledge in energy systems, including Z. Jason Ren who specializes in the water-energy nexus, Chris Greig,  a former energy executive who is now the Theodora D. ’78 & William H. Walton III ’74 Senior Research Scientist at the Andlinger Center, systems engineers Christos Maravelias and Jesse Jenkins along with energy storage expert Kelsey Hatzell. Ren is a professor of civil and environmental engineering and the Andlinger Center for Energy and the Environment. Maravelias is the Anderson Family Professor in Energy and the Environment and professor of chemical and biological Engineering and the Andlinger Center for Energy and the Environment. Jenkins and Hatzell are both assistant professors of mechanical and aerospace engineering and the Andlinger Center for Energy and the Environment.

One outcome of that investment in energy systems research is the publication of a groundbreaking study from Princeton, Net-Zero America (NZA), which lays out five technological pathways to achieving net-zero emissions in the United States by 2050. Acclaimed as one of the most comprehensive and granular analyses of the economic, environmental and labor impacts of a clean energy transition in the United States to date, the report was covered by the NYTimes, the Washington Post, Foreign Affairs, among other media outlets. It’s been a resource for the Biden administration and other academic institutions around the world, which have since adopted the NZA methodology to do accompanying studies for other countries. The University of Queensland and University of Melbourne launched a study on Australia, Net-Zero Australia, in collaboration Andlinger Center researchers, and other regional projects around the globe are being discussed.

“Lynn has been a true visionary and inspirational leader,” said Andrea Goldsmith, dean of the School of Engineering and Applied Science. “She brought an entrepreneurial spirit and deep experience to her role, along with wisdom and urgency that led the center to have real impact in the race to transform energy systems and mitigate climate change. I will miss Lynn’s leadership and partnership, yet I’m confident her broad skillset and strategic thinking will serve the new Global Centre for Maritime Decarbonisation very well and drive positive change in one of the most challenging sectors, shipping,” Goldsmith said, who is also the Arthur LeGrand Doty Professor of Electrical Engineering.

Under Loo’s leadership, the center also developed and piloted the University’s first executive education program in partnership with the World Economic Forum, aimed at equipping decisionmakers to think critically and creatively about their roles in solving environmental and climate problems and to guide their organizations in support of this goal. She also championed growth of the Gerhard R. Andlinger Visiting Fellowship and Princeton E-ffiliates Partnership. She oversaw the start of the fellowship program to bring to Princeton experts from the energy industry to share practical knowledge and ways to make research more practical. Greig was an inaugural Gerhard R. Andlinger Visiting Fellow in Energy and the Environment before becoming a senior research scientist at the center. E-ffiliates is a corporate membership program that Loo started as associate director for external partnerships under founding Andlinger Center director Emily Carter. As director, Loo expanded and diversified the program, bringing in companies in the financial, venture capital, consulting, technology and utility sectors. These include companies such as American Water, American Tower, Community Energy, Deloitte, Mercator Partners, and Worley.

Loo says the Andlinger Center has tremendous forward momentum. She said Net-Zero America has catapulted the center on to the national and global stage as a driver of conversations about how to accelerate the clean energy transition, as well as a resource for those working on the issue.

Claire Gmachl, who is also Head of Whitman College, said she is honored to step in to lead the Andlinger Center as interim director.

“The work of the Andlinger Center is especially important today as the country and world hunger for pathways to climate restoration and justice,” said Gmachl. “The interdisciplinarity and deep expertise of the research community well positions the center to develop effective solutions that factor in the technological, economic, policy and behavioral dimensions, and drive impact on a broad scale.”