Sunxiang (Sean) Zheng has been selected as the newest Distinguished Postdoctoral Fellow with a focus on developing a novel material for capturing carbon dioxide at industrial facilities like power plants. Zheng’s work blends civil and environmental engineering, material science and chemistry.

Capturing carbon dioxide typically requires highly corrosive solvents, and most methods demand large energy expenditures to isolate and store the carbon; in power plants, for example, carbon capture requires 20-30% of the plants’ total energy output. Through his research and the Distinguished Postdoctoral Fellowship, Zheng will facilitate collaboration between White’s and Ren’s labs to create a more efficient way to capture and use carbon dioxide.

Zheng and White are working to create a porous 2D nanomaterial to provide a safer and more energy efficient way of filtering the carbon dioxide out of smokestacks. White works with 2D materials, those with a dimension less than 100 nanometers. These materials, which are so thin they are nearly invisible, can be extremely difficult produce. Last year, White was granted an award from Princeton E-ffiliates Partnership to work on producing a 2D nanomaterial made of calcium hydroxide, after having shown computationally that it could effectively capture carbon dioxide. Zheng brings to the table experience designing, synthesizing, and characterizing such materials.

The porous material the research team hopes to create is similar to a filter for an air conditioning unit. The carbon dioxide gas stream would flow through pipes at industrial plants and reach the membrane material that traps the gas. An electric voltage is used to electrochemically reduce the carbon dioxide to carbon monoxide, a high-value chemical used to produce syngas and metals and a variety of acids and alcohols. Instead of using energy to simply release the carbon dioxide from the membrane and store it in underground wells, the process would help valorize carbon dioxide by producing a useful product with the gas, while preventing atmospheric carbon dioxide pollution. 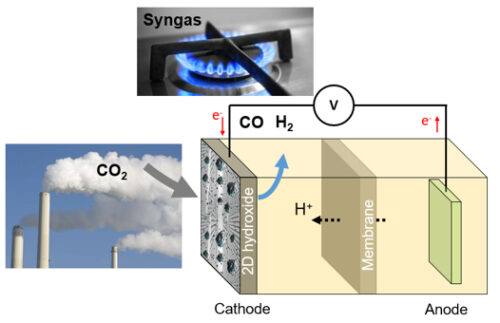 Developing an electrochemical cell within the filter chamber where the reduction would take place, will rely on Ren’s expertise on electrochemistry and water systems engineering. Zheng will work with members in Ren’s WET Lab to develop new processes and reactor systems that enable efficient separation and resource recovery.

“This fellowship allows me to lead multidisciplinary research on novel materials and techniques that will contribute to solving problems at the water-energy-carbon nexus,” Zheng said.

“Zheng’s expertise in developing 2D nanomaterials is key to finding new materials that will be critical to creating the types of closed loop systems that will help mitigate climate change via capture of carbon dioxide,” said White.