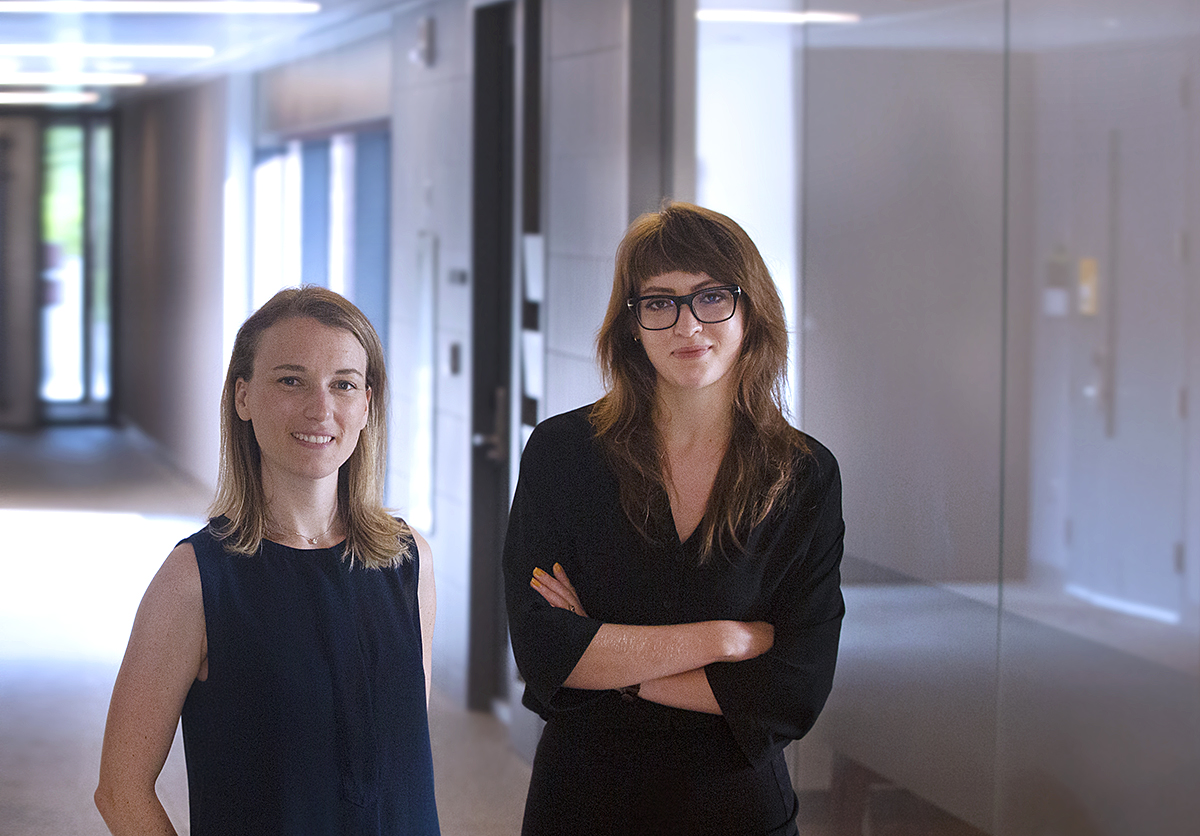 Julie Euvrard, left, and Allyson L. McGaughey, right. Photo was taken in compliance with University COVID-19 policies. At the time of the shoot, there were no longer mask and indoor social distancing requirements in place. (Photo by Bumper DeJesus)

Julie Euvrard and Allyson L. McGaughey have been appointed the newest Andlinger Center Distinguished Postdoctoral Fellows for their work on engineering organic semiconductors for use in solar cells and LEDs, and improving the performance of tools used for water treatment, respectively.

Euvrard brings expertise in a new and highly-specialized methodology for characterizing organic semiconductors. McGaughey creates novel polymer-based tools for preventing membrane degradation in large-scale water treatment systems. The fellowship aims to support researchers who bridge the gap between two or more Princeton labs and use expertise in each to advance an emerging field and find solutions related to energy and the environment.

Exploring the promise of organic semiconductors

Organic semiconductors have been commercialized for LEDs, such as in smart phone screens, but are still in the research stage for solar cells. The semiconductors are more physically flexible than conventional solar cells and can be made very transparent. They also have the potential to be much cheaper than common silicon solar cells but generally have low efficiencies in comparison. The LEDs do not contain the same toxic metals that can be found in alternative solar cells, such as lead-based perovskites.

Euvrard is working with Barry Rand, associate professor of electrical and computer engineering and the Andlinger Center for Energy and the Environment, to forward the field of organic semiconductors and study the fundamental properties of the materials. Euvrard will combine Rand’s expertise in making high-quality thin solar films with her understanding of advanced characterization tools to more precisely identify how organic materials form active solar layers and how layer composition affects cell properties and performance. Euvrard is using a new tool and methods. She is one of only a few of people in the world who has access to and knowledge of the technique, known as the carrier-resolved photo-Hall effect, developed by IBM, which allows for materials to be rapidly characterized, according to Rand. The technology is highly efficient, requiring fewer experiments and samples to explore the fundamentals behind organic semiconductors and other emerging semiconductors, which opens the door to more and deeper research on the semiconductors.

“What gets me up in the morning is semiconductor physics but I hope I can contribute to society beyond satisfying my own curiosity. Being part of the Andlinger Center makes me believe that this research will be useful in the long term for energy research,” said Euvrard.

Euvrard earned a Ph.D. at CEA Grenoble, France, and University Lille I, France. Prior to joining the Andlinger Center, she was a postdoctoral research associate at Duke University, where she focused on perovskite materials for photovoltaic applications. Euvrard is also working with Antoine Kahn, the Stephen C. Macaleer ’63 Professor in Engineering and Applied Science, who has expertise in semiconductor physics.

Euvrard said, “What I appreciate at the Andlinger Center is that there is broad expertise that will be really valuable for my research.”

As water scarcity worsens around the globe, water suppliers seek to treat increasingly diverse sources of water with varying quality levels to provide potable drinking water, which requires advanced separation processes. Developing such processes and devices may allow people to more easily purify wastewater for potable use and reduce the energy needed for desalination processes. McGaughey plans to develop a novel polymer coating for the membranes and tune the coating properties to prevent the buildup of pollutants, collaborating with Rodney Priestley, who is an expert on polymer science and the Pomeroy and Betty Perry Smith Professor of Chemical and Biological Engineering.

Membranes are used to pre-treat highly contaminated waste streams, and used in reverse osmosis processes, which are typical water filtration methods. In nearly all cases of membrane use, membranes are effective at separating the water from its impurities, but contaminants often build up on the membrane’s surface during the separation process. Organic matter, oils and other pollutants pile up on one side of the membrane as the water flows through it, a process known as fouling, which increases energy consumption and operational costs, and reduces the permeability and efficacy of the membrane. McGaughey is developing a coating for the membrane made of polymers that repulses or manages the oils and contaminants from the membrane itself. She selects polymers based on their repulsion or attraction of water or other properties that prevent contaminants from sticking to the membrane.

As a graduate student, McGaughey discovered links between membrane properties and wettability in membrane distillation and developed new characterization terms. At Princeton, she will continue to study the relationship between membrane properties and water treatment system performance. Co-advisor, Z. Jason Ren, professor of civil and environmental engineering and the Andlinger Center for Energy and the Environment, specializes in water treatment systems, including measures such as energy efficiency, water production, and the characterization of waste streams. McGaughey will leverage Ren’s expertise to understand the performance of the coatings and to measure their environmental attributes.

She said these collaborations will expand the possibilities of her research and the depth of what she can do. In Priestley’s lab, she will learn to make the coatings herself, rather than tinkering and experimenting with pre-manufactured polymers.

McGaughey earned a Ph.D. University of Southern California in civil and environmental engineering.